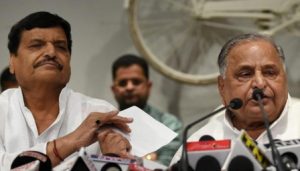 Lucknow: Shivpal Yadav on Tuesday opined that Samajwadi Party patriarch Mulayam Singh Yadav was right in opposing SP-Congress alliance.
Shivpal, who is not in good terms with Chief Minister Akhilesh Yadav said, he was with Netaji, when asked whether Mulayam Singh Yadav was right in opposing SP-Congress alliance for the UP polls.
The SP patriarch trashed the alliance and said he would not campaign for it.
“I am completely against the alliance. I will not campaign for it,” Mulayam said on Sunday when his son and CM Akhilesh Yadav and Congress vice president Rahul Gandhi held their first joint press conference in Lucknow and held a road show displaying great bonhomie.
Shivpal Yadav, who was engaged in a bitter war with his nephew and UP CM Akhilesh Yadav, has been left out of star campaigners’ list of Samajwadi Party for the state assembly elections 2017.
After the Election Commission settled the dispute between Mulayam and Akhilesh in the latter’s favour, the SP patriarch had submitted a list of 38 candidates to his son but chosen not to field nominees separately.
The Election Commission had given the symbol ‘Bicycle’ to the faction headed by Akhilesh Yadav, recognising it as the Samajwadi Party, which came as a major boost to the Chief Minister ahead of assembly polls in Uttar Pradesh.