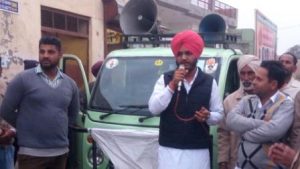 Davinder is a student of the five-year BA-MA (economics) course at Panjab University, Chandigarh. His last semester remains. But his real test is in Fazilka now, where he is more Ghubaya, hardly Davinder.
Son of the rebel Shiromani Akali Dal MP Sher Singh Ghubaya, Davinder is the Congress candidate from this segment next to the Pakistan border. He has declared he is 25, the minimum age requirement to be a candidate. And his affidavit makes him the youngest in fray for the February 4 Punjab elections. But rivals say he is not even 24 yet. That can turn to legal fight later. For now he is firmly banking on the past to brighten his future — the family’s future, that is.
What’s the syllabus? Caste, plus perceived pride/threat.
The Ghubayas are Rai Sikhs, a Scheduled Caste (SC) that has 52,000 of the 1.6 lakh votes in Fazilka. The community has large concentration in border villages, including Kabulshah Hithad, where Davinder tells the crowd in the village square: “Saade nal Sukhbir Badal ne jo kita, oh kise ton lukkya nahin hain. Tusi saare Davinder ban ke election ladni hai, te jittni hai. (What Sukhbir Badal has done to us, is no secret. All of you are Davinder, and have to fight and win).
Variations of these lines are his speech in most villages. Nothing more. So much so that he does not even mention his rivals — BJP minister Surjit Kumar Jyani, AAP’s Samarbir Singh, and independent Rajdeep Kaur, sister of slain gangster Jaswinder Singh Rocky (a Robinhood figure who finished a close second last time).
He sticks to the script even on the day that an alleged sex video of his father has gone viral. “It is a hathkanda (ploy) of the rivals,” he tells us. The father has blamed Sukhbir. The reason for the Ghubayas’ anger with Sukhbir is spelt out by both father and son: “He tried to finish us off in our stronghold by appointing outsiders to handle the seat. It’s we who had brought him to Jalalabad.”
The family’s native village, from which they take their surname, is in neighbouring Jalalabad, which Sher Singh vacated to enable SAD chief Sukhbir to enter the assembly in 2009. Ever since, Sher Singh is the MP from Ferozepur Lok Sabha seat, of which the two segments are a part. But now he’s gone rogue, and the game’s gone dirty.
“Our community’s pride is in danger,” says Sarwan Singh, 26, a mason at the public meeting. “I don’t have a smartphone, and I am too caught up in work all day to earn my living, so I have not seen any video. How does it matter?” Five labourers surrounding him nod along.
Have they seen Davinder before? “We hear he studies in Chandigarh,” says Surjit Singh, 25. What have you studied? “Zero! You see, they have land.” Davinder’s elder sisters are both law graduates and the eldest brother is an IIT graduate.
“Look, we can’t risk electing someone who is not our ‘Raa bhraa’ (Rai Sikh brother). We are blamed for all that’s wrong in this region — mostly motorcycle theft these days,” adds Kishan Singh, 29.
The dark descends by the time we follow Davinder to the next stop, Thangni. A light hanging near his head — he stands on the SUV bonnet to deliver his lines — conks off. The crowd directs mobile phone torches towards him. He is brief: “What do I need to tell you? You know what to do!” He is then weighed against laddoos, and there is minor stampede for the sweets.
We ask Davinder as he walks away: What does he feel about caste being the chief poll factor? “My father has done a lot here, and Sukhbir has tried to hurt us. That’s why I am in fray. You know everything,” he parrots.
His convoy leaves. The crowd disperses. There are no streetlights for miles. Darkness returns, and envelops the bright red tip of a cigarette that some boys are sharing in a corner. Their giggles disturb the quiet. Someone just cracked a joke.