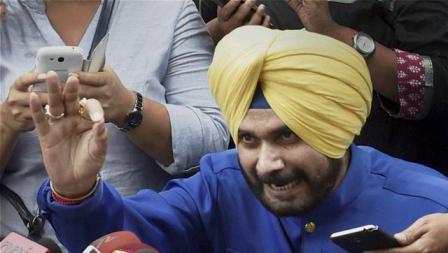 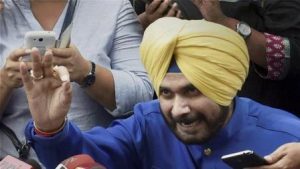 Former Indian cricket opener Navjot Singh Sidhu’s ambitious move to start a second political innings with the Aam Aadmi Party (AAP) after leaving the Bharatiya Janata Party (BJP) has hit a roadblock.
That was amply clear from AAP supremo Arvind Kerjiwal’s rapid-fire tweets on Friday that former MP Sidhu “needs time to think” on joining the AAP. But, it was in the last of the three tweets that the Delhi chief minister delivered a loaded message. By saying that his respect for Sidhu “will continue whether he joins the AAP or not”, Kejriwal admitted, for the first time, that negotiations on the terms for Sidhu joining to AAP had reached nowhere.
It squarely puts a question mark on Sidhu’s joining the AAP, which fancies itself as a potential winner in the upcoming assembly elections in Punjab.
The ruling Shiromani Akali Dal (SAD) quickly interpreted Kejriwal’s tweets as a “goodbye” signal to Sidhu, who has been hobnobbing with the AAP ever since his resignation as Rajya Sabha MP on July 18. And the Congress lost no time in making a flurry of fresh overtures to woo Sidhu, whose father was a Congress leader from Patiala.
However, Sidhu’s wish list has cut little ice with Kejriwal. The behind-the-scene parleys between the two derailed last week after they failed to hammer out a mutually acceptable deal, according to AAP sources.
Projecting Sidhu as the CM candidate has potential to trigger a volcanic eruption in AAP — a risk that Kejriwal knows only too well. Senior AAP leaders in Punjab differ strongly on whether the party should declare a CM candidate, or not. State unit convener Sucha Singh Chhotepur, who himself nurses chief ministerial ambitions, wants the party to follow its principle of elected MLAs choosing their leader after the polls.
Sangrur MP Bhagwant Mann, who heads the AAP’s Punjab campaign committee, is in favour of the party declaring its CM candidate as the party did ahead of its Delhi campaign. Also in race for the top job, Mann believes that it will help the party’s campaign.
APP is already facing dissent after it declared the first two lists of 32 candidates. Chhotepur, who has openly expressed his dismay over candidate selection, is waiting to meet Kejriwal over the issue. Already divided into Punjab and Delhi camps, the party could face even more dissent if it declares Sidhu as the CM candidate.
Among Sidhu’s demands, all that AAP is willing to offer him is the responsibility to spearhead the campaign. As for a ticket to fight the election, Sidhu has been asked to choose between himself and his wife, sources said, as the party’s norms say two persons from a family cannot be given the ticket.
And Kejriwal’s latest move has dashed Sidhu’s hope of AAP pitching him as its trump card in Punjab. Rather, it has a blunt message: Take it or leave it. Clearly, Sidhu had overreached himself.
Having burnt his bridges with the BJP, Sidhu is fast running out of options. Though the Congress has warmed up to him with Manpreet Badal even saying that he “will walk barefoot” to welcome Sidhu into the Congress, it’s not an easy choice for the former Amritsar MP. For, cutting a deal with the Congress at this stage will deal a severe blow to his credibility. With his grand gambit losing much of its impact, Sidhu finds himself in a political bind — as a nowhere man.