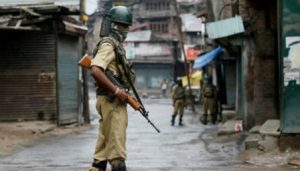 Srinagar: Authorities on Saturday continued curfew and shutdown for the 43rd consecutive day paralysing life across Kashmir.
Police said curfew will remain in force in Anantnag town and parts of Srinagar city while restrictions will continue in other parts of the Valley.
The state government has advised its employees to resume duties failing which they would not be given salaries for the month of August.
Employees have described the directive as “dictatorial and unjustified” given the prevailing law and order situation.
For the sixth consecutive on Friday, no prayers were allowed at the Jamia Mosque in Nowhatta area of old city Srinagar.
Senior separatist leaders, Syed Ali Geelani and Mirwaiz Umer Farooq defied detention when they came out of house arrest and tried to march towards Aaripanthan village in Budgam district to pay homage to four civilians killed in CRPF firing.
Geelani and Mirwaiz were arrested and lodged at local police stations for some time before they were again placed under house arrest in Srinagar city.