Cong for Sidhu: Capt cites past, Manpreet ‘ready to go barefoot to welcome’ 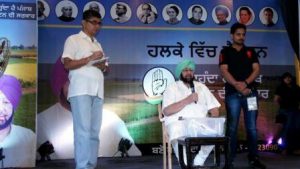 As talks between former BJP MP Navjot Singh Sidhu and the Aam Aadmi Party (AAP) appeared to have hit a dead end, the Congress in Punjab went all out on Friday in its eagerness to rope in the cricketer-turned-politician.
“Sidhu is always welcome in the Congress. Bahut changa munda hai (He is a very good boy)… has Congress DNA in him,” said state Congress chief Capt Amarinder Singh on the sidelines of a ‘Halke vich Captain’ programme in Phagwara. Sidhu’s father, Bhagwant Singh Sidhu, was an office-bearer of the district Congress committee in Patiala. “He will always be better off in the Congress than in any other party,” said the former chief minister. This point was made by another former Congress CM, Rajinder Kaur Bhattal, in Sirhind: “Joining the BJP was just an experiment. Congress is in his blood.”
And a relatively recent Congress entrant, Manpreet Singh Badal, went a step further: “I will go barefoot to welcome Sidhu into the party if he agrees to join.” Manpreet, former state finance minister who merged his People’s Party of Punjab (PPP) with the Congress, added, though: “We have not talked for years but he is a good friend and a true soul… Doors of political parties are never closed for anyone.”
Bhattal and Manpreet were talking to the media on the sidelines of the party’s manifesto committee meeting. However, they did not answer queries on what the Congress can offer to Sidhu, whose joining of the AAP was believed to have got stuck at a demand to be projected as the CM candidate.
Taking a dig, Amarinder said AAP chief Arvind Kejriwal backstabbed Sidhu: “Kejriwal first promised Sidhu that he will announce the joining the day Sidhu resigns from the Rajya Sabha. But, later, he changed his words.”
‘AAP ignoring Chhotepur’
Amarinder termed the AAP a party of arrogant people. “They (AAP) have even ignored their state convener Sucha Singh Chhotepur; sidelined him in the poll ticket-distribution process.”
He also referred to a recent allegation by an AAP national council member that he was asked to pay Rs 50 lakh to get the ticket for his wife; at which the party has sent that member a legal notice.