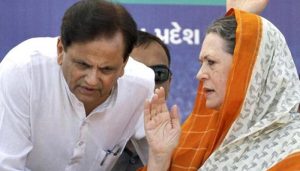 Congress MLA Raghavjee Patel, considered close to former party strongman Shankersinh Vaghela, indicated he would also resign and join the BJP.
Ahmedabad: Amid the exit of six Congress MLAs ahead of Rajya Sabha polls, a senior party legislator has said Ahmed Patel will find it difficult to win the elections as more opposition lawmakers are likely to resign in the days to come.
Congress MLA Raghavjee Patel, considered close to former party strongman Shankersinh Vaghela, indicated he would also resign and join the BJP.
Ahmed Patel has been fielded by the Congress for the August 8 Rajya Sabha polls.
“The state party leadership, along with Congress high command, is responsible for whatever is happening right now. In the coming days, around 20 Congress MLAs would severe ties with the party. Thus, it will be impossible for Ahmed Patel to win the Rajya Sabha polls,” Raghavjee told media persons yesterday.
“When I met Ahmed bhai recently, I cautioned him about this situation and urged him not to contest polls, as I already saw this coming. I firmly believe the Congress cannot win the Rajya Sabha seat from Gujarat,” said the MLA from Jamnagar (Rural) seat.
“Since there are only two main parties in Gujarat, the BJP is the only option for me if I leave the Congress. I have already had a word with BJP national president Amit Shah and state president Jitubhai Vaghani and conveyed my wish to join the party,” said Raghavjee.
Another Congress MLA from Jamnagar, Dharmendrasinh Jadeja, also indicated he would leave the party.
“A large number of Congress workers are unhappy with the way the party is functioning. Though I and Raghavjee had made numerous representations about it in the past, the party high command has not given any satisfactory answer. I will take appropriate decision in coming days,” said the MLA from Jamnagar (North) seat.
During last two days, six Congress MLAs have tendered their resignation. Three of them, including Balwantsinh Rajput, joined the BJP on Thursday.
Rajput is now pitted against Ahmed Patel.
In the 182-member Assembly, the strength of Congress has gone down to 51.
Of the total 11 RS members from the state, the term of three of them — Smriti Irani and Dilipbhai Pandya (both BJP) and Ahmed Patel — is ending on August 18.