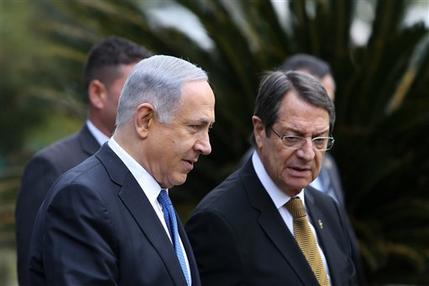 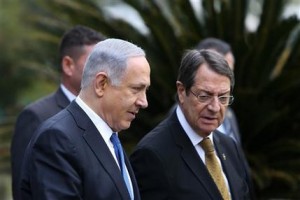 NICOSIA, Cyprus (AP) – The leaders of Cyprus, Greece and Israel pledged on Thursday to work together to seize opportunities emerging from newly found offshore gas reserves in order to bolster stability and security in a region wracked by conflict.
The talks in the Cypriot capital are the first tripartite summit between Cypriot President Nicos Anastasiades, Greek Prime Minister Alexis Tsipras and Israeli Prime Minister Benjamin Netanyahu.
“Our states share the same values as well as the conviction that in order to effectively counter multiple challenges confronting us on a local, regional and international level, we must work collectively,” Anastasiades said at a news conference.
Discussions centered on energy cooperation regarding newly found offshore gas reserves as well as migration, countering terrorism and boosting tourism. The countries also signed a cooperation agreement on water resource management.
Netanyahu said the leaders agreed to set up a tripartite committee that would look into the possibility of building a pipeline to carry natural gas found in waters off Israel and Cyprus to Europe via Greece.
Netanyahu said the committee would also the possibility of an undersea cable to link the electricity grids of the three countries.
Tsipras said Greece can act as a bridge for the transfer of east Mediterranean gas to the EU.
Netanyahu said “an even wider circle of nations” in the region also “seeks stability, prosperity, security and peace.”
“These are momentous goals and by working together we can advance them more effectively than we can separately,” he said.
Tsipras said the leaders agreed that dealing with the largest migration of people since World War II means tackling the problem “at its root” – poverty and war. Anastasiades said that additional financial support and economic development in war-torn areas would help alleviate the migration crisis.