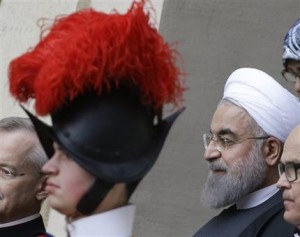 ROME (AP) – Iranian President Hassan Rouhani says freedom of expression doesn’t extend to insulting other people’s faith.
Rouhani told reporters Wednesday that he and Pope Francis discussed the issue during their audience at the Vatican on Tuesday.
Francis was once asked about the extremist attacks on the satirical French magazine Charlie Hebdo. He suggested that a violent reaction could be expected when someone’s faith is insulted, saying that anyone who insults his mother can expect to be punched.
Rouhani concurred, saying “freedom of expression doesn’t mean that people can do what they want.”
He made the comments hours before arriving in Paris on the next leg of his European trip.