Happiness is the key- Guruji

Edmonton (ATB): “I will keep on hammering till you do not understand that happiness is the key to lead blissful life” stated Shri Brahmrishi Guruvanand Swami Ji while delivering his discourse to about 1000 folks at Bhartiya Cultural Society of Alberta, Edmonton temple last week.
Born in Delhi on 12th of January 1941, Srimad Gurudev has an illustrious academic background which includes a B.Tech (Elec.) degree from IIT Kharagpur, a B.Sc. degree in Physics Honors, an M.A. in Sanskrit, Vedas, Grammar and Astrology along with a PhD in Astrology. His mentor was Shri Devaraha Babaji of Devariya. His knowledge about all the great Vedas, Epics, Srimad Bhagavadgita, other religious shastras, all aspects of Astrology etc. since his childhood is immense, incomparable, total and unparalleled.
A son of God, a selfless protector, a person of the greatest ability, propagator of the highest human values, His Holiness is a divine flame who has dedicated his entire life to the cause and welfare of mankind. He teaches in a language understood by even a layman. He considers service to humanity as the greatest religion. At the same time, He exhorts people to propagate the teachings of Lord Mahavira across the world. His ideal is Swami Vivekananda, whose philosophies and ideologies influenced him greatly.
He sought to learn from MahaTapasvi Siddhiraj Pragyachakshuji the art of “DhyaanYog” and other divine Siddhis in the terrains of the Himalayas. He has activated all his 7 chakras or Kundalinis thereby gaining immense spiritual powers. By His efforts through philosophical and spiritual research, He gained absolute knowledge and perfection over the great traditional Mantras and 1703 Tantrik Siddhis advocated by the Great Rishis of this universe.
He has the honor for having participated in the All Religion World Conference on seven occasions and being awarded the Gold medal each time along with the recognition of “Highest personality”. In 1974, He was also honored by the title of “Astrology Expert” by the Astrological Society of Germany.
Through the aegis of Vishal Dharma Chetan Manch (World Spiritual Awareness Forum), in the course of his travel through more than 172 countries and his divine preaching transformed the lives of millions of devotees.
Guruji demonstrated his occulted powers by presenting necklaces, stones, parsadam and Rudrash to devotees.
“I eat once a day, wear unstitched cloths and do not accept cash” confirmed Guruji and stated that he only travel world over at this age to guide young generations to lead meaningful life.
You make tons of money by earning dollars. However, lose your kids forever.
While concluding, he made couples to held hands and preach jointly for health, happiness and long life.
“We are privileged that Guruji visit Edmonton frequently and bless all” expressed Sunil Bhatara, staunch follower and organizer of Guruji’s visit. 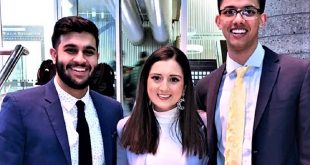