Assembly elections 2019: Voting in Maharashtra, Haryana on October 21; results to be declared on October 24 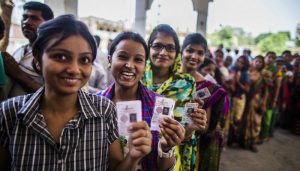 There are 8.94 crore registered voters in Maharashtra while in Haryana, there are 1.82 crore registered voters.
The Election Commission on Saturday declared the dates for Assembly elections in Maharashtra and Haryana. The elections in the two states will be held in single phase, voting for which will be held on October 21.
The counting of votes will be held on October 24 in both the states where the Bharatiya Janata Party (BJP) is currently in power.
The last date for filing nomination in Maharashtra and Haryana is October 4, following which the candidates would be scrutinised. The Last date for withdrawal of nomination by the candidates is October 7.
While addressing a press conference in the national capital, Chief Election Commission Sunil Arora informed that there are 8.94 crore registered voters in Maharashtra while in Haryana, there are 1.82 crore registered voters.
With the announcement of the polling dates, the model code of conduct comes into effect immediately in both Maharashtra and Haryana.
The Chief Election Commissioner urged parties and candidates to refrain from using plastic during the campaign for the Assembly elections. He further said that any incomplete form would lead to the cancellation of a candidate’s nomination.
He added that the candidates would need to furnish details about the criminal cases against them. Transaction of money by candidates and parties through banks will also be monitored, added Arora.
Apart from Maharashtra and Haryana, the Election Commission also announced the dates for by-elections on 64 constituencies in Bihar, Karnataka, Kerala, Uttar Pradesh and 14 other states. The by-elections on these seats will be held on October 21 and results will be declared on October 24.
In the 2014 Maharashtra Assembly elections, the BJP won 122 seats, Shiv Sena 63, Congress 42 and NCP 41 seats. However, some of the lawmakers in the 288-member Assembly shifted to the ruling alliance.
In Haryana, the BJP is currently in power in the 90-member Assembly, by bagging 47 seats in 2014 elections. The INLD has 19 seats while the Congress has 15.