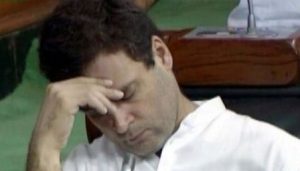 New Delhi: In an another embarrassment to Congress party, Rahul Gandhi was apparently spotted dozing off in the Lok Sabha on Wednesday during the crucial debate on atrocities on Dalits.
The television shot, which has gone viral on the social media accompanied by carping comments, shows the Congress vice-president with closed eyes and head tilting on the right while his party MPs take on the government over recent Gujarat Dalit atrocity issue.
The image, splashed on TV, went viral even as Congress President Sonia Gandhi launched an all-out attack on the Narendra Modi government, accusing it of destabilising institutions, polarising society and mistaking its parliamentary majority for a licence to impose its narrow ideology on people.
“In the last few months, we have witnessed how the Modi Government’s project of destabilising institutions and polarising our society has played out with renewed vigour to the detriment of constitutional values,” Sonia said.
“The Modi Government has mistaken its parliamentary majority for a licence to impose its ideology on our people. It seems to have forgotten that parliamentary majority can never be the reason to abandon the principles and practice of constitutionalism,” she added further.
On Thursday, Rahul along with Delhi Chief Minister Arvind Kejriwal will visit Gujarat’s Una town where some Dalit youths were brutally thrashed last week for allegedly killing a cow.
Some persons claiming to be Gau rakshak thrashed seven Dalit youths in Una last week alleging that they had killed a cow which they were skinning.