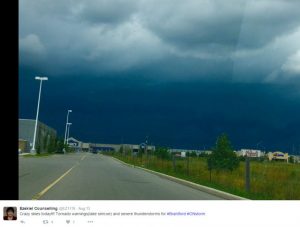 Saturday’s storms included an EF-1 tornado which touched down on the southeast shore of Lake Simcoe on Saturday. No serious injuries were reported.
A tornado — with winds travelling at 150 to 175 kilometres per hour — touched down in the York Region on Saturday, says Environment Canada.
The tornado was spotted near Sunset Beach to Port Bolster on the southeast shore of Lake Simcoe at around 12:50 p.m., according to Dave Phillips of Environment Canada.
After assessing the damage to some buildings and trees in the area, an Environment Canada damage survey team determined that the tornado was an EF-1 on the Enhanced Fujita scale that ranges from EF-0 (winds travelling between 90 to 130 kilometres) to EF-5 (winds travelling between 315 kilometres per hour or more).
“This is the fifth confirmed tornado of the season,” said Phillips.
“We normally get 12 tornadoes so this is less than what we expect.”
A cold front that came through on Saturday clashed with the humid conditions in the GTA, which set off a series of thunderstorms with heavy rainfall.
Environment Canada also investigated possible tornado sightings in south Oshawa, in Ashburn north of Whitby, Brampton, and Wellesley but later concluded that these were windy downbursts and not twisters.
According to Phillips, a few people suffered from minor injuries as a result of these downbursts.
“Some people were shaken up,” but there was nothing serious to report.
The strongest recent tornado to hit Ontario in recent years was recorded in Goderich, Ont. on Aug 21, 2011 — an EF-3, according to Phillips.