Top US diplomat to meet with Venezuela officials amid crisis 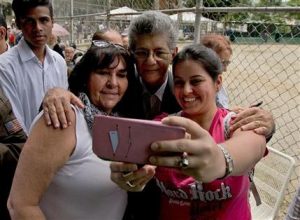 CARACAS, Venezuela (AP) – A senior U.S. diplomat was in Venezuela on Tuesday to meet with officials to jumpstart dialogue between the normally hostile governments as the socialist-run nation is torn apart by daily food protests and a campaign to oust President Nicolas Maduro.
Thomas Shannon, a career diplomat with extensive experience in Latin America, flew to Caracas after weeks of looting and hunger riots in Venezuela. The riots led to hundreds of arrests and several deaths.
State Department spokesman John Kirby said Shannon, who now serves as undersecretary of state for political affairs, hoped to foster dialogue about the social, economic and political challenges facing the oil-rich country. He was to meet with leading opposition figures and was also expected to meet with Maduro and other government representatives.
The visit comes as the Organization of American States is set to meet later in the week in Washington to debate the mounting crisis and weigh sanctioning Maduro for allegedly stamping out political dissent in violation of regional commitments to democracy.
Maduro used the diplomatic mission as a cudgel to batter his critics. In televised statements, he returned to one of his favorite topics: What he describes as the childish stubbornness of the country’s political opposition.
“I think it is very good that we are taking these steps with the U.S.,” he said. “I only wish the Venezuelan opposition would engage in serious, transparent dialogue in the same way.”
The opposition held talks with Maduro two years ago after bloody anti-government protests swept the nation, but that dialogue eventually dissolved without bearing fruit. Today, government opponents are taking a different tack, organizing around a recall referendum they hope will lead to Maduro being removed from office this year with one of their own potentially to replace him.
Thousands of Caracas residents stood in a warm drizzle Tuesday waiting to verify their signatures on a recall petition by having their fingerprints taken. The weeklong verification drive began Monday and is the first of a series of steps in the byzantine recall process. People in the lines said they were glad to wait and see the recall as the best way to remedy the shortages and triple-digit inflation that are forcing many here to skip meals.
Food protests continued to pop up in the capital on Tuesday. A small group of residents stopped traffic near a Caracas slum, while in a wealthy neighborhood people hung banners saying “we are hungry.”
Shannon, a former ambassador to Brazil, steps into the quagmire with an uncertain outcome. A procession of visits he made last year to Caracas yielded no tangible results, setting low expectations that this trip could result in a breakthrough on releasing political prisoners and calls for the referendum to move forward.
The U.S. and Venezuela haven’t exchanged ambassadors since 2010, and even when announcing Shannon’s visit last week at a summit in the Dominican Republic, U.S. Secretary of State John Kerry and his Venezuelan counterpart could barely hold back the animosity that has long characterized relations.
But as Venezuela unravels, U.S. officials are increasingly concerned about the risk of further bloodshed and a humanitarian crisis that could spill across its borders and undermine President Barack Obama’s legacy in a region where he made history by reopening relations with Cuba.
Members of the opposition say the recall drive and food riots have caused the government to tighten control over critics. Human rights groups say intolerance for dissent has led to the jailing of dozens of people they consider of political prisoners.
Over the weekend, officials arrested two opposition activists who had been traveling outside of Caracas to participate in the validation process. On Tuesday, Human Rights Watch denounced the arrests and called on authorities to produce a legal rationale for holding the men or release them immediately.