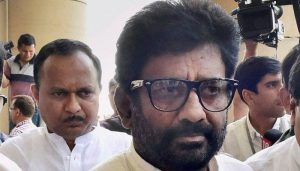 Mumbai: A day after Air India lifted its ban on MP Ravindra Gaikwad, the Shiv Sena leader, Saturday, said the national carrier employee R Sukumar, who was assaulted by him, was a mad person.
Speaking to news agency ANI, the tough-talking MP from Maharashtra’s Osmanabad said the Air India official (R Sukumar) is a mad person and eight cases of quarrel are registered against him.
The Sena MP also rejected the reports that eight air tickets were booked by him.
“Seven times tickets were booked in my name. I did not do it. Who did? I have raised this issue in the Parliament,” Gaikwad asserted.
Gaikwad is expected to meet Sena chief Uddhav Thackeray later today.
Air India on Friday lifted its ban on Gaikwad after he expressed regret for assaulting one of its employees, ending his 14-day humiliating ordeal when other airlines also refused to let him on board in solidarity with the national carrier.
According to AI, the ban was lifted after the Civil Aviation Ministry wrote to the airline, a day after Gaikwad expressed “regrets” in the Lok Sabha over the March 23 incident.
In a sudden climbdown after combative Shiv Sena members disrupted Lok Sabha proceedings, Gaikwad, had written a letter to Union Civil Aviation Minister Ashok Gajapathi Raju yesterday expressing “regret” over the “unfortunate incident”.
Gaikwad’s party colleagues in the Lok Sabha also demanded the flying ban against him be revoked and the party threatened to boycott an April 10 National Democratic Alliance meeting in case the matter was not sorted out at the earliest.
The Osmanabad MP had assaulted the AI employee on March 23 after he landed here on a Pune-Delhi all-economy flight. Complaining about not being able to travel business class, Gaikwad repeatedly hit Sukumar with slippers when the latter went to persuade him to disembark after he refused to alight. Gaikwad later boastfully claimed on TV he had hit the official 25 times with slippers.

2017-04-08
Mehra Media
Share
Previous Now, you may have to pay a new price for petrol and diesel daily
Next Bangladesh PM Sheikh Hasina accorded ceremonial welcome