Breaking News
Home / World / Ram Mandir can be built in Ayodhya, mosque can come up in Lucknow: Shia Waqf board

Ram Mandir can be built in Ayodhya, mosque can come up in Lucknow: Shia Waqf board 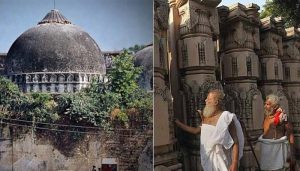 Rizvi said that the proposal was prepared after holding discussions with all stakeholders.
The Shia Central Waqf Board has offered a new solution to the Babri Masjid-Ram Janmabhoomi conflict in Ayodhya. According to the proposal of the board, a Ram temple can be built in Ayodhya while a mosque can be constructed in Lucknow.
Talking about the proposal, Shia Central Waqf Board chairman Syed Waseem Rizvi said that the proposal was prepared after holding discussions with all stakeholders.
He said, “After discussions with different parties we have prepared a proposal in which a Ram Temple will be built in Ayodhya and a Mosque can be built in Lucknow.”
“This is a solution which will ensure peace and brotherhood in the country,” Rizvi added.
This comes almost a week after Rizvi said that it was amicably decided that no new mosque would be built in Ayodhya. He had said, “It has been amicably decided that no new mosque will be built in Ayodhya or Faizabad. The Shia Waqf board will identify a piece of land in a Muslim-dominated area and inform the government.”
The Akhil Bharatiya Akhada Parishad had objected to the construction of a mosque in Ayodhya or Faizabad in a meeting that was also attended by Ram Janambhoomi Trust president Mahant Nritya Gopal Das.
It was decided in the meeting that the decision would be conveyed to the Supreme Court by December 5, a day before the 25th anniversary of the demolition of the medieval-era structure.
Rizvi had claimed that as the Sunni Waqf Board had lost the case of its registration in several courts, only the Shia Waqf board had a right to the mosque.
Since it is for an amicable solution of the temple-mosque issue, people from any community, including Sunni organisations, can participate in the talks but those with “negative approach” would not be allowed, the Shia Waqf board chief had said.