Mulayam Singh Yadav now ready to campaign for SP-Congress alliance, says Akhilesh will be next UP CM 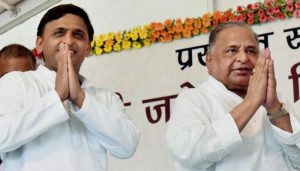 Lucknow: Former Samajwadi Party (SP) chief and now its mentor Mulayam Singh Yadav on Monday announced that Akhilesh Yadav will continue to be the Chief Minister of Uttar Pradesh if his party wins Assembly Elections.
The former Uttar Pradesh chief minister further said that he will campaign for SP-Congress alliance.
Earlier, Mulayam had told media that he would campaign for his younger brother Shivpal Yadav first. After that, he would go to seek votes for the candidates named by his son and Uttar Pradesh Chief Minister Akhilesh Yadav.
Notably, Shivpal has been sidelined by his nephew Akhilesh.
In a series of flip-flops ever since he was overthrown by Akhilesh, Mulayam has been making contradictory noises.
First, he said he asked his supporters to contest against Congress candidates in the 105 seats given to them according to the alliance conditions and had even threatened not to campaign for the Samajwadi Party and Congress candidates.
He, however, retreated and told reporters in Delhi later that Akhilesh was his son and that he had very little option but to canvass.Akhilesh was his son and that he had very little option but to canvass.
Shivpal, after filing his nomination in Jaswantnagar last week, had announced he would form a new party after March 11 when election results are declared.
He has also been taking potshots at Akhilesh saying he got everything due to luck and legacy whereas people like him who slogged all through for the Samajwadi Party were given a raw deal.
Opposition parties including the Bahujan Samaj Party (BSP) and Bharatiya Janata Party (BJP) have been alleging that the family feud in the Yadav clan is a staged attempt to deflect people’s mind from lawlessness and corruption in the state.