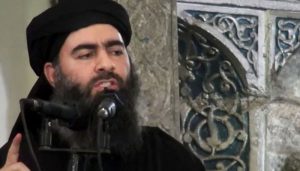 American intelligence sources claimed that al-Baghdadi – the world’s most wanted man was near Raqqa in Syria when the missile struck in May.
Washington: The elusive ISIS leader Abu Bakr al-Baghdadi was wounded in an airstrike in May last year and had to relinquish control of the dreaded terror group for up to five months, according to a media report today.
Citing several US officials, CNN reported that American intelligence agencies have assessed with a high degree of confidence that the world’s most wanted man was near Raqqa, Syria in May when the missile struck.
Their assessment is based on reports from ISIS detainees and refugees in Northern Syria that emerged months after the airstrike, the officials added.
Baghdadi’s injuries were not considered life-threatening but they did mean he could not continue to command the daily operations of the group, the report said.
At the time, ISIS was about to lose control of the Iraqi city of Mosul and its so-called capital Raqqa had been nearly encircled by US-backed forces.
It is unclear whether Baghdadi was hit in a targeted attack or if he was “collateral damage,” the report said.
It is also unclear who fired the missile. US officials do not know the exact date of the strike so are unsure if a Coalition aircraft was involved, or whether Baghdadi’s injury was the result of a Russian missile.
“There have been isolated strikes by Russians in Raqqa, but as there’s no timeline for it, we don’t know if it’s ours,” a US official said.
It is believed the airstrike occurred close to the date offered by the Russian military in June when they claimed to have killed or injured the ISIS leader.
At the time, Russia’s Defence Ministry said it was investigating reports Baghdadi had been killed in an airstrike on May 28, on the outskirts of Raqqa, the group’s primary stronghold, which US-backed forces took back in October.
Analysts warned at the time reports of Baghdadi’s death should be treated with scepticism given the high number of previous false reports.
Baghdadi has made only one public appearance, in July 2014, in the al-Nuri Mosque in Mosul, which was retaken by Iraqi security forces in June last year.
ISIS has since released various audio messages it claims to be of Baghdadi, most recently in September last year which appeared to contain a reference to news events that showed it had been recorded since the Russian claims of his death.
The US-backed campaign is now focusing on the remaining pocket of territory controlled by ISIS — the stretch of desert along the Syrian-Iraqi border, known as Jazeera.
Various reports have suggested to US intelligence that this is where Baghdadi would most likely be, although it is a vast and sparsely populated area, making his capture complex, the CNN report said.