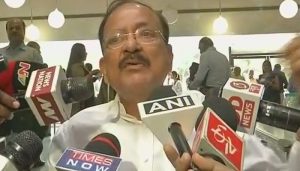 Congress vice president Rahul Gandhi is most likely to visit Madhya Pradesh`s Mandsaur on Wednesday, where at least five farmers were killed in police firing.
New Delhi: Union Minister Venkaiah Naidu on Wednesday described Madhya Pradesh as ”an island of peace” in the wake of violent protests over killing of five farmers in police firing in the Mandsaur district yesterday.
The minister, while appealing to protesters to call off their stir, also asked the main opposition party Congress not to politicise the issue unnecessarily.
Madhya Pradesh is an island of peace. I tell Congress don’t politicise, don’t fuel violence in the name of farmers, Venkaiah Naidu said, according to ANI.
Naidu’s appeal came ahead of Congress vice president Rahul Gandhi’s visit to Mandsaur where a minor scuffle broke out between the protesting farmers and the local police, a day after five persons were killed in police firing.
The agitating farmers were protesting against the delayed visit of Mandsaur collector and SP to the area after what several political leaders termed as ”unfortunate” incident.
They also demanded the presence of state’s Chief Minister Shivraj Singh Chouhan to Mandsaur.
The scuffle broke out as Congress vice president Rahul Gandhi is most likely to visit Mandsaur today to meet the kin of the deceased farmers during his day-long visit.
Mandsaur collector Swatantra K Singh today informed that there was no order to open fire on protesters. I have assured them (farmers) a strict action, he added.
Five farmers were killed and several others were injured on Tuesday in Mandsaur as police opened fire on peasants, who indulged in violence and stone-pelting.
Meanwhile, Shivraj Singh Chouhan had apprised BJP president Amit Shah of the situation in Mandsaur over the phone.
Condemning the incident, Chouhan had yesterday announced a compensation of Rs one crore for kin of those killed during protest and accused the opposition party for instigating the violence.
The MP Chief Minister also ordered a judicial probe into the incident even as Mandsaur city and Piplya Mandi area were put under curfew after the violence.
Riots broke out in Pipliamandi on Monday night.
Farmers damaged railway tracks and railway crossing gates in Mandsaur, set fire to vehicles and attacked cops.
On Tuesday, protesters at Piplia Toll Naka threw stones at police and torched 27 vehicles.
Around noon, shots were fired, killing at least five. DM Swatantra K Singh ordered internet shutdown in Mandsaur.
Protesters also set fire to a police check post in Nahargarh.
Authorities then imposed curfew in Mandsaur and Pipliamandi and Section 144 is in force in neighbouring Ratlam district.
However, protest is intensifying despite the CM’s assurances that the government would buy onions and moong dal from farmers.
Several political parties have condemned the incident and called for a thorough probe.