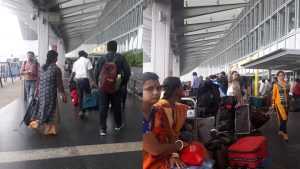 The shutdown of flights has led to a big confusion among the passengers who are stranded at the Kolkata airport.
KOLKATA: The Directorate General of Civil Aviation (DGCA) has ordered the closure of Kolkata Airport for several hours till Saturday in view of the severe cyclonic storm Fani, which hit the Odisha coast on Friday and is heading towards West Bengal.
The Indian Aviation Regulator said that that there will be no flights to and from the Kolkata airport from 3 PM (Friday) to 8 AM (Saturday) in view of the cyclonic storm ‘Fani’.
A senior government official also told ANI that the timings regarding the shutdown of flight operations at Kolkata Airport have been revised after observing the progress of Cyclone Fani.
However, the lack of information regarding the shutdown of flights has led to a big confusion among the passengers who are stranded at the Kolkata airport.
On Friday, the DGCA issued a fresh statement saying, “Revised timings provided by AAI for Kolkata airport; From 1500 IST on 3.5.2019 to 0800 IST on 4.5.2019.”
It is to be noted that the Airports Authority of India (AAI) owns and manages more than 100 airports across India.
In a series of tweets, Union Civil Aviation Minister Suresh Prabhu said that all airlines should promptly respond to the passengers affected by Cyclone Fani.
“We are ready to offer help for the stranded due to cyclonic storm Fani. Control room, helplines are manned all times to assist affected passengers. All airlines must immediately respond to passengers of the concerns,” he tweeted.
Parbhu also said his Ministry is working to help in the rescue and relief operations.
Extremely severe cyclonic storm Fani made landfall on the eastern coast wreaking havoc in Odisha on Friday. Despite extensive damage caused by near 200 kmph winds and heavy to very heavy rainfall, no loss of life has been reported so far.
Damaging houses, thousands of trees and electricity poles, uprooting trees, the eye of Fani almost 25 km in diametre is sending off wind velocity of 150 to 175 kmph and even above at some places touching 180 or more, said the Indian Meteorological Department (IMD).
The eye of the cyclone which was even an hour back party over the Bay of Bengal has completely moved inland.
The cyclone started crossing into the Odisha coast close to Puri between 8 AM and 10 AM on Friday. The process of landfall will continue till 1 PM.
The cyclone has completely thrown normal life out of gear with heavy to very heavy rains lashing the coastal districts since Thursday night.
The road network in several districts suffered extensive damage. The power distribution network has also been severely affected. Asbestos sheets of temporary housing facilities have been ripped off.
Special Relief Commissioner Bishnupada Sethi said they have received reports regarding uprooting of trees in some areas while there was no report of loss of lives so far.
About a million people were evacuated to safer places in Odisha due to the cyclonic storm.
Met department said while strong winds will continue to blow for next couple of hours, heavy rainfall will continue across the state.
“The process of cyclone Fani`s landfall in Puri will take place from 8 AM to 11 AM,” said Bhubaneswar Met Centre Director HR Biswas.
Its eye diameter was put at 28 km at around 9 AM. Half of Fani`s eye was in the sea then, the IMD said.
The already rough sea in Puri is turbulent. Evacuation has been carried out till 5 km of the beach area. Even the calm sea in Chandipur is violent, officials said.
It is very likely to move north-northeastwards and cross Odisha Coast between Gopalpur and Chandbali, south of Puri during May 3 forenoon with maximum sustained wind speed of 170-180 kmph gusting to 200 kmph.
Nearly 11 lakh people have been evacuated from the vulnerable areas to safer places in the last 24 hours in Odisha. Ganjam and Puri districts have evacuated more than 3 lakh and 1.3 lakh people, respectively.
Although the evacuation was extremely difficult given that people were not ready to leave their house and belongings. Relief workers had a tough time, speaking to news channels several complained.
The Indian Navy warships – Sahyadri, Ranvir and Kadmatt – are on stand-by with relief materials and medical teams.
Other naval vessels are also on standby at Vishakhapattanam.
Naval divers teams have moved to Odisha from Vishakhapattanam.
The cities of Puri, Paradip, Bhubaneswar, Gopalpur have been experiencing rains since Thursday.
Strong winds measuring up to 174 kmph lashed Chilika early on Friday uprooting trees.
The highest number of people – 3 lakh – were evacuated from Ganjam district while 1.3 lakh others from Puri district, said an official from the Special Relief Commissioner (SRC) office.
About 10,000 villages and 52 Urban Local Bodies (ULBs) were likely to be affected by the cyclonic storm.
The state government has advised people not to step out of their houses.
As a precautionary measure, all shops, business establishments, private and government offices will remain closed in 11 coastal districts.
Flight operations were suspended in Bhubaneswar`s Biju Patnaik Airport from Friday midnight. 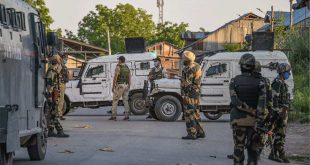