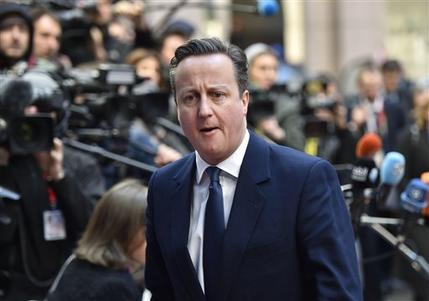 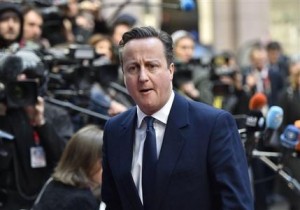 BRUSSELS (AP) – The Latest on talks on a deal for Britain at the European Union summit (all times local):
11:25 a.m.
British Prime Minister David Cameron has arrived for more EU talks saying he’ll do everything he can to secure a deal on the U.K.’s relationship with the bloc.
Cameron met other leaders until after 5 a.m. Friday. Returning a few hours later, he said that “we’ve made some progress, but there’s still no deal.”
“We’re going to get back in there, we’re going to do some more work and I’ll do everything I can,” Cameron said.
The 28 EU leaders hope to cement an agreement Friday, but have yet to iron out differences on issues ranging from welfare benefits to financial regulation.
10:40 a.m.
French President Francois Hollande is insisting that new European Union rules for Britain should maintain strict financial regulation.
France is putting up tougher-than-expected resistance to British Prime Minister David Cameron’s push for EU reform ahead of a British referendum on whether to stay in the 28-nation union.
Arriving for the second and final day of an EU summit in Brussels on Friday, Hollande said there is still work to be done before reaching a deal with Britain despite talks that stretched nearly until dawn.
He insisted that Britain should not be given any “right of veto or blockage” and that all EU countries should have rules limiting speculation and avoiding new financial crises.
Countries like France that share the euro currency worry that protections for Britain and other non-eurozone nations would offer unfair advantage to Britain’s financial center, the City of London.
8:45 a.m.
British Prime Minister David Cameron faces tough new talks with European partners after through-the-night meetings failed to make much progress on his demands for a less intrusive European Union.
Britain’s future in the union – along with heightened tensions around Europe’s migrant crisis – are dominating an EU summit in Brussels scheduled to finish Friday with what Cameron hopes is a deal for EU reform.
He wrapped up talks in Brussels around 5:30 a.m. and is expected to resume meetings late morning.
A British official speaking on customary condition of anonymity said Friday morning there are “some signs of progress but nothing yet agreed and still a lot to do.”
Cameron wants a deal that will let him urge Britons to vote “yes” to continued membership in an upcoming referendum.

2016-02-19
Mehra Media
Share
Previous Analysis: In a resilient North Korea, can sanctions work?
Next Profit or patriotism? What’s driving fight between US, Apple