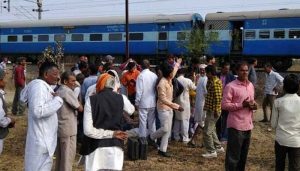 Bhopal: Madhya Pradesh Chief Minister Shivraj Singh Chouhan claimed on Wednesday that that three Islamic State operatives had placed the pipe bomb in the 59320 Bhopal-Ujjain train and sent picturs of the same to Syria.
Speaking to ANI here, Chouhan further informed that the three terrorists, who hailed from Kanpur and Kannauj, had made plans to rush back to Lucknow once their nefarious plans to set off the bomb had come through.
“The explosives recovered from them had inscriptions on it saying `ISIS- we are in India`. The terrorists even uploaded the picture of the pipe bomb they had placed in the train and the then sent it to Syria. So it`s proof that they were related to ISIS,” he said.
The Chief Minister also revealed that the terrorists had learned the mechanism of making a bomb on the internet and then trained to carry out the explosion.
“They had placed the timer of the bomb in such a way that it explodes in two hours. Fortunately the pipe bomb was placed in an upper berth, which significantly reduced the damage and loss of lives in the attack. Our ATS was in constant touch with central agencies and nabbed them. Ateef Mazaffar was their mastermind and Mohammad Danish and Sayyed Mir Hussain were also caught,” he added.
Hailing the Madhya Pradesh Anti-Terrorism Squad (ATS) for the nabbing the accused so quickly, Chouhan also thanked Prime Minister Narendra Modi for his vigilance in ensuring there was smooth coordination between the state and central agencies.
Meanwhile, Madhya Pradesh`s Inspector General (IG) of Police, Law and order Makrand Devaskar has confirmed the explosion, which took place in Bhopal-Ujjain passenger train in Shajapur district yesterday, was a terrorist attack.
“It was an IED blast and IED blasts are always terrorist attacks. The police have arrested three persons from Pipariya,” Devaskar said.
At least nine people were injured after the explosion. Taking cognizance of the matter, Madhya Pradesh Home Minister Bhupendra Singh said that an investigation has been initiated into the matter.”
All officers already reached the spot and at least nine are injured in which two are critical. The investigation is on and according to initial reports there is an odor of gun powder.” Singh told ANI.
“Injured passengers are admitted to Kalapipal government hospital and a medical team is also sent to the location,” said Bhopal Division of Indian Railways PRO, IA Siddiqui.
The guard of Bhopal-Ujjain passenger train informed the passengers at 9.50 am about the explosion that took place ahead of guard coach, next to front of sleeper class, while the train was on run in block section between the Jabdi and Kalapipal stations.