Breaking News
Home / World / Will Suresh Kumar return? Coterie war hots up to keep him out of Punjab CMO

Will Suresh Kumar return? Coterie war hots up to keep him out of Punjab CMO 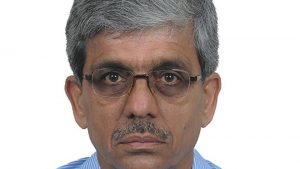 Power games: Some lobby to appoint new CPS to CM; no appeal against HC ruling so far; past, present appointments in CMO too under scanner.
Chandigarh : The war within Punjab chief minister Captain Amarinder Singh’s coteries has heated up after he on Saturday said Suresh Kumar will be back as his chief principal secretary. Even though the appointment of the retired IAS officer was set aside by the Punjab and Haryana high court on January 17, Amarinder paid Kumar a visit on Sunday to urge him to join back eventually.
The lobby gunning for Kumar’s ouster has intensified efforts to appoint a new CPS to CM even as the state has yet to challenge the single-bench judgment of the HC. Kumar has refused to defend his case, saying it is the government’s job to do that.
A senior Congress leader, who is batting for Kumar’s return but refused to be named, said the CM is aware of the “troika” that wants Kumar out of the CMO. “Amarinder has been told about the role of advocate general Atul Nanda and two of his own advisers, including Bharat Inder Chahal, who is calling the shots from behind the scenes in the vigilance department that is dealing with sensitive cases such as irrigation scam and illegal sand mining. Kumar had raised their hackles. Even if an appeal is filed against the court ruling and a stay is obtained, the uncertainty pertaining to his appointment will remain. So his detractors are trying to convince the CM that since Kumar too is reluctant to join back, the controversy should be ended by finding a new chief principal secretary,” he said.
Capt Amarinder meets Suresh Kumar for the second time in nine days
In bureaucratic circles, though, questions are being raised over the need to have a new CPS to CM when a “competent” officer such as Tejveer Singh is principal secretary to CM. To ensure that Kumar does not smell a rat, the proposal to appoint a new CPS is learnt to have been mooted through Kumar’s own pick, chief secretary Karan Avtar Singh. Efforts are also being made to garner support for the move among MLAs and ministers by proposing that the two seniormost ministers, Brahm Mohindra and Tript Rajinder Singh Bajwa, should be calling the shots in the CM’s absence, and not retired officers such as Kumar.
When contacted, Kumar refused to comment on the time being taken by the government in challenging the HC order.
Rules flouted for advisers, past and present
As the government tries to defend Kumar’s case, financial irregularities in other past and present political appointments have come under the scanner. Lt Gen BS Dhaliwal (retd), a technical adviser to Parkash Singh Badal when he was CM, has been retained by the Congress government. He was given a year’s extension in May.
“Finance minister Manpreet Badal wants the right symbolism. Then why did he not object to the largesse for CM’s team?” — Senior Congress MLA
According to documents accessed by HT, he is drawing both pay and pension from the state government.
The proposal approved by the finance department for four advisers, including Dhaliwal, on May 8, 2013, reads, “Since these are not regular posts, there is no need to cut their pension.”
The Comptroller and Auditor General (CAG) and the Punjab accountant general had red-flagged the grant of pension simultaneously. But Dhaliwal has been retained on the same terms and conditions as in the previous government.
Retired IAS officer Paramjit Singh Aujla was appointed as secretary to the then deputy chief minister Sukhbir Badal with both pay and pension, that too when even the post of deputy CM does not exist constitutionally. Aujla did not respond to calls and messages.
Austerity, really?
Also, a day after CM Amarinder mooted the proposal that MLAs pay their income tax on salary, the lawmakers are questioning the hefty salaries of those appointed as his advisers, political secretaries and officers on special duty (OSDs). The CM’s five advisers take home a lump sum of Rs 1.5 lakh a month each — three times the pay of a cabinet minister — plus perks of a minister of state, including official accommodation, cars, phones and staff. His three political secretaries are being paid Rs 1.25 lakh a month each as per an unusual formula. The salary that Major Amardeep Singh Natt would have got from India Army, which he left in 2000, has been kept as the benchmark for the others too!
Holding both government and party posts is clear violation of rules. But former merchant navy captain Sandeep Sandhu is drawing salary as political secretary to CM and is also general secretary of the Punjab Pradesh Congress Committee. Both Natt and Sandhu did not respond to calls.
“Finance minister Manpreet Badal wants the right symbolism. Then why did he not object to the largesse for CM’s team? If we are rich, the government should survey the wealth of CM’s political appointees,” said a senior Congress MLA, refusing to be named.