Tejashwi Yadav dares BJP to chargesheet him, says CBI can’t be used to intimidate him 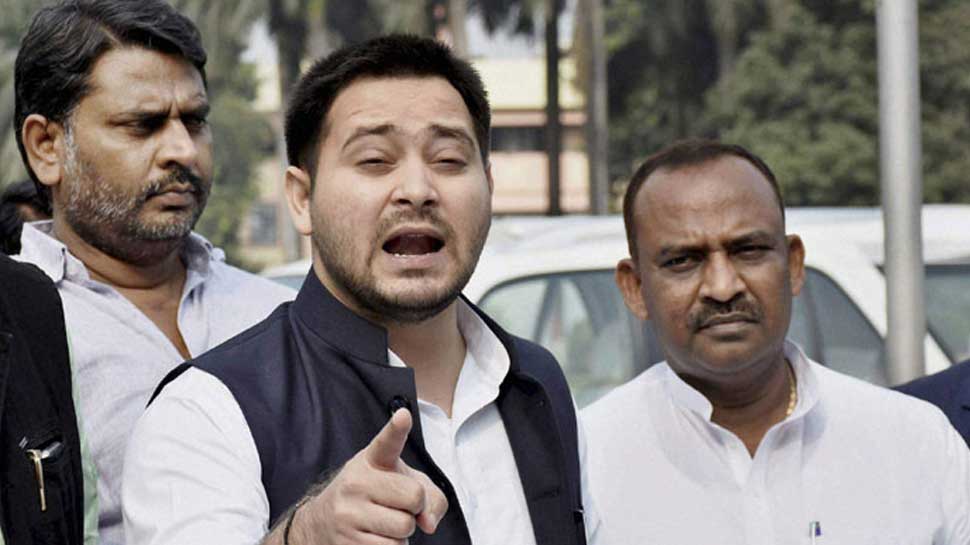 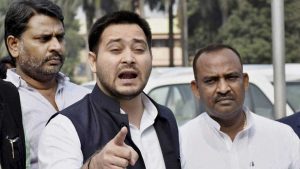 RJD leader Tejashwi Yadav has said that the CBI can’t be used to intimidate his family.
PATNA: Former deputy Bihar chief minister Tejashwi Yadav, who has taken a centrestage in Bihar politics in the absence of his father and veteran politician Lalu Prasad, has once again dared the ruling BJP to chargesheet him if it can.
Tejashwi Yadav, who has been very vocal in his attacks on the Nitish Kumar government in Bihar, took to Twitter and tweeted, ”From state assembly to streets, I have openly dared Sushil Kumar Modi (Bihar Dy CM) to tell CBI to chargesheet me.
Tejashwi also asked to know if there is any other leader in the country to have dared the authorities to chargesheet him?
Further, in a warning to the ruling BJP, Yadav said that those who indulge in ‘table politics’ on CBI can threaten people like Nitish Kumar, but not him.
The Rashtriya Janata Dal (RJD) leader had recently alleged that there is a threat to his father Lalu Prasad Yadav’s life and claimed that a conspiracy is being hatched by the BJP.
“I am sure there is a threat to Lalu Ji’s life, looking at the conspiracy being planned by BJP,” he had said.
He made the remarks on Saturday after Lalu was sentenced to seven years in prison each in connection with two cases in the fourth fodder scam case.
Former Bihar deputy chief minister also blamed Chief Minister Nitish Kumar and the BJP for recent incidents of violence in Araria, Bhagalpur and Darbhanga.
Launching a scathing attack on the Janata Dal-United leader, Yadav alleged that Nitish Kumar is taking decisions under fear.
“Hum jitna BJP ko doshi maante hain, usse zyada hum doshi Bihar ke CM ko maante hain. Jo bhi hinsa huyi hai, woh chaahe Araria ho, Bhagalpur ya Darbhanga ho, iska doshi aur koi nahi Nitish Kumar ji hain (While we believe BJP to be the culprits, we feel that Nitish Kumar is more to be blamed. Whatever violence has taken place – be it Araria, Bhagalpur or Darbhanga, no one else but Nitish Kumar is responsible for it),” said the young RJD leader.
Responding to his father’s conviction in fodder scam cases, Tejashwi had said that Lalu ji (former chief minister and RJD supremo Lalu Prasad Yadav) in an ideology himself.
He said this shortly after the RJD won a Lok Sabha seat and an Assembly seat in Bihar by-elections held recently.
Tejashwi’s father has been awarded a 14-year-jail term and asked to pay Rs 60 lakh in fine for the fourth fodder scam cases. Tejashwi, however, said that they will challenge the verdict in High Court. “We will challenge it in HC and decide the further strategy on the basis of overall judgement in all the four cases,” he said.
The fourth case pertains to fraudulent withdrawal of Rs 3.13 crore from the Dumka treasury in the early 1990s. Lalu has been sentenced under different sections of the Indian Penal code and the sections of Prevention of Corruption Act.
Former Bihar chief minister Jagannath Mishra, however, was acquitted in the case along with 12 other accused.
Lalu has been serving a prison term in Birsa Munda Jail in Ranchi since 23 December 2013 after being convicted in the second fodder scam case pertaining to illegal withdrawal of money from the Deogarh treasury.
The RJD supremo is currently undergoing treatment at the Rajendra Institute of Medical Sciences (RIMS) in Ranchi, where he was admitted last week after he complained of chest pain and discomfort in jail.