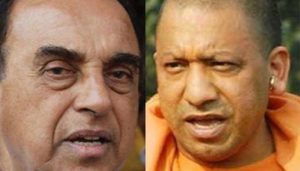 Lucknow: Senior BJP leader and MP Subramanian Swamy will meet UP CM Yogi Adityanath in Lucknow on Tuesday.
Reportedly, the construction of Ram Mandir in Ayodhya will be an important part of the discussion when the two leaders meet.
Talking to media, Swamy confirmed, “He (UP CM) told me – come to Lucknow we’ll have meeting. Yes I’ll certainly discuss Ram temple but this is unofficial meet.”
According to sources, Ram Circuit will also be discussed.
Earlier, on Tuesday morning Tourism Minister Mahesh Sharma met Yogi Adityanath and discussed various issues pertaining to UP tourism.
The Supreme Court had directed to resolve the sensitive issue of rebuilding the Ram Mandir in Ayodhya out-of-court.
The top court’s direction came after Subramanian Swamy sought an urgent hearing with the Supreme Court to appeal for the building of a Ram Mandir in the much disputed Ayodhya site.