Punjab: Why are Congress leaders desperate to capture truck unions? 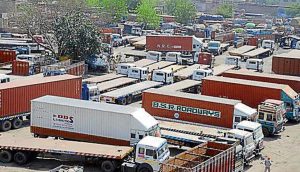 Three killings, 20 bloody clashes, at least 40 injuries and thrashing of a journalist — the power struggle to wrest control of truck unions is turning murkier by the day ever since the Congress formed the government in Punjab last month.
At many places, be it Bathinda or Phillaur and Rama Mandi in Jalandhar, close relatives of local Congress MLAs are leading these power struggles, reminiscent of what the Akalis did on coming to power in the state 10 year back.
At Bareta in Mansa, where two people died in a clash between Congress and Akali groups, the struggle to control the truck union started even before the new government took charge.
It’s not only the muscle power of truck operators that the politicians eye, the money minted illegally through their unions is what counts for the party in power.
“Truck unions give the politicians an organised army of musclemen, who can be used at rallies. On the money front, since there is no government law to regulate unions, union presidents make hefty amounts by controlling the movement of trucks. By installing the president of their choice, politicians rule from behind the scenes,” says Bakhtaur Dhillon, a Bathinda-based senior journalist.
How unions make money?
Each truck union has its own territory and it doen’t allow any truck from other territories to pick load from there. The union president charges ‘goonda tax’ from each truck depending upon the load and issues a slip allowing it to pick the load.
“There are unions that even charge money from trucks from outside to unload their stock. The unions maintain no accounts and there are no checks on spendings,” says a former truck union president from Barnala.
During paddy and wheat procurement season, the unions and their presidents make big bucks. What adds to a union president’s clout and financial strength is the fact that when any union bags the contract to transport foodgrains, the payments are done into his account. The president then distributes this money according to his wish.
Punjab Truck Union state president Happy Sandhu said seeing the clout and strength of truck unions, politicians always try to rule them.
“The change of guard in a truck union is a general practice, but since big interests are involved, it sometimes leads to bloodshed while at other times consensus prevails,” he said.
TRAIL OF VIOLENCE
April 15: A journalist attacked by Gidderbaha truck union president Charanjit Singh Dhillon and his accomplices
April 9: Sarpanch of a Hoshiarpur village shot dead in Chandigarh over a union dispute.
March 24: Two truck operators injured in a clash between two groups owing allegiance to the Congress over control of Fazilka truck union.
March 13: Six persons arrested for murder bid after a clash over the control of Rama Mandi truck union.
March 12: Two dead, one injured after members of two truck unions clash at Bareta town in Mansa.