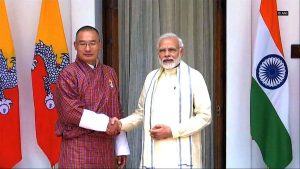 Prime Minister Narendra Modi embark on a two-day visit to Bhutan on Saturday where he is scheduled to hold bilateral talks with the top leadership.
New Delhi: Prime Minister Narendra Modi on Saturday embarked on a two-day visit to Bhutan where he is scheduled to hold bilateral talks with the top leadership including his Bhutanese counterpart Lotay Tshering, Bhutan King Jigme Khesar Namgyel Wangchuck, among others.
Ahead of Prime Minister Modi’s departure, Ruchira Kamboj, India’s Ambassador to Bhutan, told news agency ANI that PM Modi’s visit from August 17-18 to Bhutan could be seen as a continuum leading to a strengthened India-Bhutan partnership. Further, around 10 memorandums of understanding (MoUs) are expected to be signed between the two countries and PM Modi is scheduled to inaugurate five events during his visit.
On August 17, PM Modi will arrive at the Paro International Airport following which he shall head to the Semtokha Dzong. PM Modi will also be accorded the guard of honour when he visits the Tashichhodzong on the same day.
At the Dzong, the PM shall be meeting the Bhutanese King, or the ‘Druk Gyalpo’, Jigme Khesar Namgyel Wangchuck. The Chhipdrel Procession will also take place in honour of PM Modi.
“My visit to Bhutan in the beginning of the current term reflects the high importance that the Government attaches to India’s relations with Bhutan, our trusted friend and neighbour.” PM Modi said in his pre-departure statement.
Calling India-Bhutan an important pillar of Government of India’s ‘Neighbourhood First’ policy, PM Modi said, ” I look forward to having fruitful discussions with H.M. the King, H.M. the Fourth Druk Gyalpo and the Prime Minister of Bhutan on the entire gamut of our bilateral relations. I also look forward to addressing young Bhutanese students at the prestigious Royal University of Bhutan.”
On the second day of his visit, PM will engage with the students at the Royal University of Bhutan. Several MOUs between the Bhutan University and Indian universities are slated to be signed during the PM’s visit.
Ahead of PM Modi’s visit to his country, Bhutan PM Lotay Tshering had praised PM Narendra Modi in a Facebook post, where he said that the leader of the world’s largest democracy was a man “so humble and natural” when he visited India after assuming office. The post was titled ‘In anticipation of the visit’.