Edmonton (ATB): Acharyas from Kerala Swami Chidhanadapuri and Swami Muktananda Yati took part in the meet which was held last week at Taylor College Hall.
Sabarimala Tantri Kandararu Rajeevararu and Vidyasagar Gurumurthy greeted the gathering through video message.
Such a meet is held for the first time in Edmonton with the participation of different NRI organizations.
The two Acharyas were accorded a grant welcome at the venue and it was followed by chanting of Veda mantras on the stage.
Swami Muktananda Yati said at the meet that by passing through the three different stages of ‘sravanam’ ‘mananam and ‘nididhyasanam’(learning, apprehending and meditation) the Human mind could reach sublime levels of spirituality.
“The person who has reached such a level could find God in all beings,” he added.
Swami Chidhanadapuri, who spoke at the meeting said that for India which has contributed immensely to spirituality and modern science, the greatest contribution to the world was the concept of ‘Dharma’.
“It is high time for the Hindu society to keep aside political and caste differences and stay united,” he added.
Children from Edmonton based organizations like NAMAHA, HSS, Gurukripa sung prayers, chanted mantras, recited Bhagavad Gita and Daivadasakam at the event.
Organizers of the event said that they would be holding similar events annually. 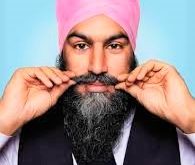 Edmonton (ATB): “I am simply taking a stand on principle” stated Singh. A video had …