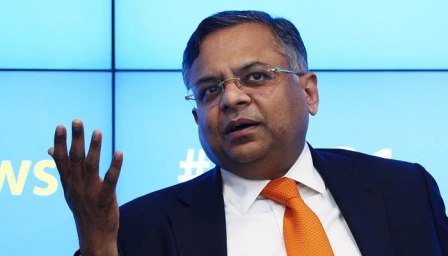 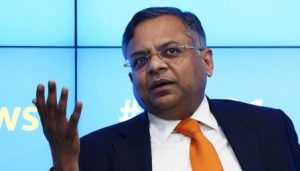 Mumbai: N Chandrasekaran, popularly known as ‘Chandra’, stepped into Bombay House on Tuesday to take over charge as Chairman of Tata Sons from Ratan Tata, who is acting as an interim Chairman since the ouster of Cyrus Mistry in October 2016.
The 54-year-old will be the first non-Parsi chairman of the 150-year old Tata Group.
Tata group will enter a new era on Tuesday as N Chandrasekaran takes over as chief, hoping to put behind an acrimonious boardroom battle that saw the ouster of Cyrus Mistry as Tata Sons Chairman.
“Will do everything we need to do, to delight people who are proud of the group” Chandrasekharan told ANI. Ratan Tata also reached Bombay House, he was serving as interim-chairman of Tata Sons, and will handover the charge to Chandra. He added that he is looking forward to working together with all the group entities.
Chandrasekharan is the man known for making India’s largest software exporter TCS what it is today, Chandrasekaran has his task cut out as the new Chairman of Tata Sons — the promoter firm of many of the operating Tata group firms.
Last week, Chandrasekaran had described his new assignment as “a very big job” with a large canvas, where there were “challenges and opportunities” .
As he steps into the role of the head of the USD 103 billion conglomerate, many immediate pressing issues will greet him.
One of his major focus areas will be the European operations of Tata Steel, particularly in the UK which has become a drag to the group after the unsuccessful acquisition of Corus.
While Tata Steel has already started selling assets in the UK, Chandra will have to decide how much assets are to be put on the block and how much could be turned around, especially keeping in mind the implications of Brexit.
Chandrasekaran, however, had hinted at what he’ll do when he said on the evening of his appointment in January that Tata Sons did pioneering businesses and stood by the operating businesses in “good times and more importantly, in bad times.”
Another problem that awaits him is Ratan Tata’s dream project Nano, which has been responsible for bleeding Tata Motors. While his predecessor Mistry wanted to end the road for the doomed ‘People’ s car’, Chandrasekaran will have to take a call how long its journey could be continued as it has accumulated losses exceeding Rs 1,000 crore.
As such, Tata Motors has set a target of making all its business units profitable. He will have to address how the group can help in making the company’s passenger vehicles business unit with or without the Nano.
Group observers will be keenly watching Chandrasekaran’s relationship with Tata Trusts and their trustees considering how Mistry accused them of interference and developing alternate power centre making him a “lame duck” Chairman.
Interestingly, his predecessor Mistry was sacked for “growing and untenable trust deficit between Tata Sons and the Tata Trusts.”
On January 12, the TCS chief was named as the Chairman of Tata Sons, capping two months of the most bitter boardroom battle in corporate history that followed the unceremonious sacking of Cyrus Mistry and letting of bad blood ever since.
An avid photographer and a passionate long-distance runner having completed several marathons around the world including Amsterdam, Boston, Chicago, Berlin, Mumbai, New York, Prague, Stockholm, Salzburg and Tokyo, all eyes are now on Chandrasekaran on how he tackles the course.