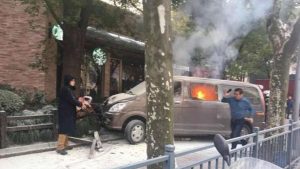 The van was carrying gas tanks and caught fire at the time of the accident
SHANGHAI: A minivan plowed into pedestrians in fron
The incident occurred at People`s Park in Shanghai around 9.00 am when residents were on their way to work.
Several people took to social media to tweet images and videos of the accident.
A Shanghai police statement said a preliminary investigation indicated that the driver of the van, a 40-year-old man, had been smoking while driving and that the vehicle had contained “dangerous substances” that apparently ignited.
Several fire trucks and police cars were pictured at the scene.