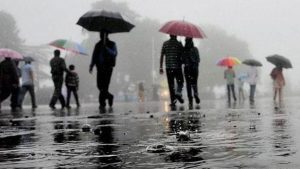 Earlier, India Meteorological Department (IMD) had predicted thunderstorm with rain in Delhi and adjoining areas.
Heavy rainfall lashed parts of Delhi-NCR on Wednesday morning, bringing much needed-relief for the residents who were reeling under severe heat conditions. Delhi, Gurugram, Noida, Faridabad and Ghaziabad reported a good amount of rain on Wednesday. Earlier, India Meteorological Department (IMD) had predicted thunderstorm with rain in Delhi and adjoining areas.
The IMD had also predicted that minimum and maximum temperatures would hover at 23 Degree Celsius and 37 Degree Celsius in Delhi. The IMD had also said that isolated places in Punjab, Haryana, Chandigarh, Himachal Pradesh, Uttarakhand, Tamil Nadu and Puducherry may witness thunderstorm and lightning with gusty winds (50 -60 kmph). West Uttar Pradesh and north Rajasthan are expected to witness duststorm and lightning with gusty winds. Vidarbha, Telangana and Tamil Nadu and Puducherry, however, will continue to reel under intense heat.
Meanwhile, private weather-monitoring agency Skymet on Tuesday predicted that Monsoon will hit Kerala on June 4 and reach Delhi by June 29. Skymet, however, also predicted that there could be less than normal rainfall during the season.
According to Skymet, Monsoon would arrive over the Andaman and Nicobar Islands by May 22 and then make way towards Kerala. “All the four regions are going to witness lesser than normal rainfall this season. East and Northeast India and central parts will be poorer than Northwest India and South Peninsula. Onset of Monsoon will be around June 4. It seems that initial advancement of Monsoon over Peninsular India is going to be slow,” said Skymet’s Jatin Singh.
It may be recalled that in February, Skymet had predicted that India would receive normal rainfall this year, pegging the probability of it at 50 per cent. 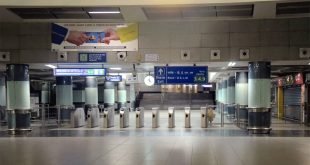