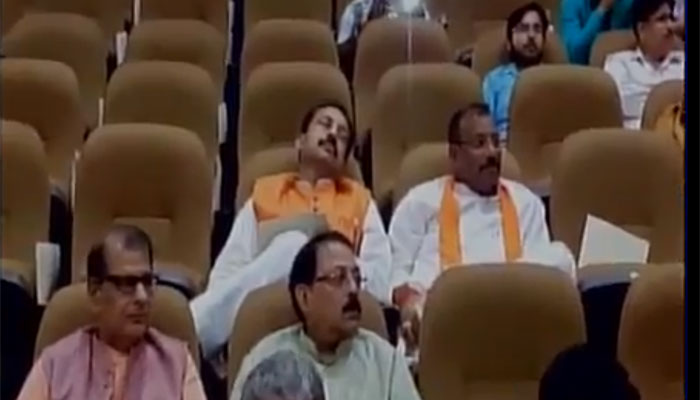 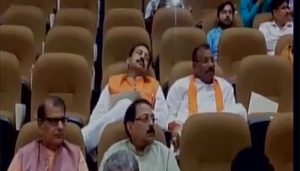 Several UP MLAs were caught on camera taking a nap during a discussion on the GST bill in Lucknow’s Lok Bhawan.
Lucknow: While the first sitting of the 17th Uttar Pradesh Legislative Assembly was marred by protests and sloganeering by the opposition lawmakers, several MLAs were later seen taking a nap during an important workshop on GST bill conducted by Chief Minister Yogi Adityanath.
According to ANI, while a discussion on the Goods and Services Tax (GST) was on in Lucknow’s Lok Bhawan, several Uttar Pradesh MLAs were caught on camera sleeping on their seats.
Interestingly, for the first time, the proceedings of the Uttar Pradesh Assembly were telecast live on television for the viewers to see how their chosen lawmakers work.
This was done on the insistence of Chief Minister Yogi Adityanath to bring greater transparency in the governance.
“People should be able to see the working of their elected representatives in house,” CM Yogi had earlier said.
However, what the viewers saw was exactly opposite of what the UP chief minister had said.
They saw their elected representatives taking a nap instead of participating in the discussion on the passage of GST bill.
The GST Bill which has already been cleared by the Parliament now awaits clearance from state governments for its pan-India implementation from July this year.
Earlier, the Adityanath Cabinet on May 2 had approved a proposal pertaining to the implementation of GST in the state, after it is tabled and ratified in the state assembly.
Till now Madhya Pradesh, Uttarakhand, Telangana, Bihar, Jharkhand, Chhattisgarh, Rajasthan and Haryana have passed the GST Bill.