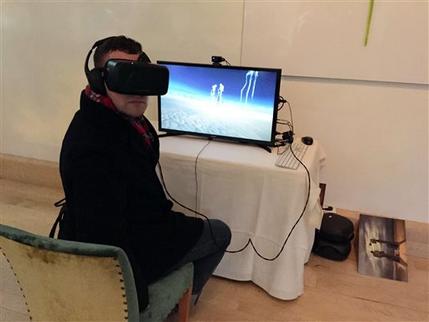 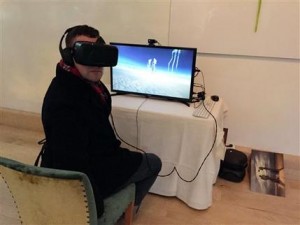 Visitors to a new exhibition at The Dali Museum in St. Petersburg, Florida, won’t just be looking at art. Thanks to virtual reality, they’ll be exploring a Dali painting in a dreamy, three-dimensional world that turns art appreciation into an unforgettable, immersive experience.
The new exhibition, “Disney and Dali: Architects of the Imagination,” tells the story of the relationship between Salvador Dali, the surrealist artist, and Walt Disney, the great American animator and theme-park pioneer.
But the museum exhibition’s highlight comes after visitors have seen the Disney-Dali show’s paintings, story sketches, correspondence, photos and other artifacts. As visitors leave the exhibition area, they’ll be invited to don a headset to try the virtual reality experience.
Called “Dreams of Dali,” the VR experience takes viewers inside Dali’s 1935 painting “Archeological Reminiscence of Millet’s ‘Angelus.'” The painting depicts two towering stone figures along with tiny human figures in a bare landscape with a moody sky. Users can move around inside the painting, using Oculus Rift headsets to navigate a trippy three-dimensional environment that includes motifs from other Dali works like elephants, birds, ants and his “Lobster Telephone” sculpture.
Accompanied by a haunting piano soundtrack punctuated by bird cries, the VR visuals also include a crescent moon, a stone tunnel and even an image of rocker Alice Cooper, whom Dali featured in a hologram he created in 1973.
“You actually have a three-dimensional feeling that you’re inside a painting,” said Jeff Goodby, whose firm Goodby Silverstein & Partners created the VR experience. “It’s not just like you’re inside a sphere with things being projected. It’s actually like there are objects closer and further away and you’re walking amidst them. It’s a vulnerable feeling you give yourself up to. It’s not like anything you’ve ever felt before.” The VR experience was previewed in New York for the media 10 days before its opening Saturday at the Florida museum.
Disney and Dali met in the 1940s in Hollywood, according to museum director Hank Hine. “Their sensibilities were very connected,” Hine said. “They wanted to take art off the palette, out of the canvas and into the world.” The exhibition looks at the castle motif that became a symbol of Disney parks, along with Dali’s “Dream of Venus” pavilion from the 1939 World’s Fair, which some consider a precursor of contemporary installation art.
Disney and Dali also collaborated on a short animated movie, “Destino,” that was eventually completed by Disney Studios. The six-minute movie, which can be found on YouTube, features a dancing girl with long dark hair, a sundial motif and a song with the line, “You came along out of a dream. … You are my destino.” Clips will be played within the gallery for the Disney-Dali exhibition and the full short will be shown at the museum’s theater.
The show also displays the Dali painting that inspired the VR experience, “Archeological Reminiscence of Millet’s ‘Angelus.'” The surrealist work was Dali’s interpretation of a 19th-century painting by Jean-Francois Millet depicting two peasants in a field, heads bowed in prayer. Dali said that his work was a “fantasy during which I imagined sculptures of the two figures in Millet’s ‘Angelus’ carved out of the highest rocks.”
Museum marketing director Kathy Greif said record numbers of visitors attended its last two major shows exploring Dali’s relationships with Andy Warhol and Pablo Picasso. Given the Disney brand’s immense popularity and the VR novelty, attendance expectations for this show are high as well.
Dali “wanted art that took you over,” said Goodby. “He wanted to take you away and do something different with your head and that’s what this does.”
If You Go…
VIRTUAL REALITY TRAILER: “Dreams of Dali,” http://thedali.org/dreams-of-dali
DISNEY AND DALI: Exhibition through June 12 at the Dali Museum, One Dali Blvd., St. Petersburg, Florida; http://www.thedali.org or 727-823-3767. Open daily 10 a.m.-5:30 p.m. and Thursdays until 8 p.m. Adults, $24; discounts for seniors, military, students, children.

In an interview, Mark Zuckerberg discusses AR/VR and says that by 2030, he expects people with smart glasses to "teleport" to locations for in-person meetings (Kif Leswing/CNBC)

Kif Leswing / CNBC: In an interview, Mark Zuckerberg discusses AR/VR and says that by …