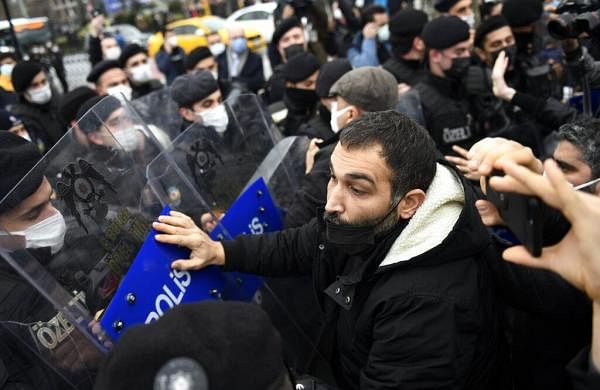 ANKARA: Turkey on Thursday rejected international criticism of its crackdown on protests by students opposing the appointment of a government loyalist to head Istanbul’s top university, warning countries to stay out of its domestic issues.

For weeks, students and faculty members of Bogazici University have been protesting President Recep Tayyip Erdogan’s Jan. 1 appointment of Melih Bulu, an academic who once ran for parliament as a candidate for Erdogan’s party. They are calling for Bulu’s resignation as the university’s rector and for the university to be allowed to elect its own president.

Some of the protests have erupted into clashes between police and demonstrators and hundreds of people have been detained, some taken away following raids of their homes, even as Erdogan has promised reforms to strengthen democratic standards.

Officials from the United States, the United Nations and the European Union have criticized Turkey’s handling of the protests as well as a series of anti-LGBT comments that were made by Erdogan and other officials while denouncing the demonstrations.

On Thursday, Turkey’s Foreign Ministry issued a statement defending the Turkish security forces’ actions, saying there were attempts by terrorist organizations to infiltrate and provoke the protests.

“We recommend that those who … attempt to give our country lessons in democracy and law, turn the mirror on themselves,” the ministry said. “No one has the right to attempt to intervene in Turkey’s affairs.”

“We are concerned by detentions of students and other demonstrators and strongly condemn the anti-LGBTQI rhetoric surrounding the demonstrations,” said U.S. State Department spokesperson Ned Price on Wednesday.

The U.N. Human Rights office urged Turkey on Twitter to stop the use of excessive force on the protesters and condemned “homophobic and transphobic comments by officials, inciting hatred and discrimination against LGBT people.”

European Parliament legislator Nacho Sanchez Amor also expressed concerns over the police violence and mass detentions and asked: “does this reflect the new positive agenda and the will of reforms?”

The Interior Ministry announced Thursday that police detained a total of 528 people over the protests, of whom 498 have since been released. Of those in custody, at least 22 people have links to terrorist organizations, said ministry spokesman Ismail Catakli.