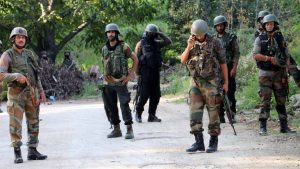 Three terrorists were killed and a policeman injured in an encounter between security forces and terrorists near Jammu on Friday.

Jammu: Three terrorists were killed and a policeman injured in an encounter between security forces and terrorists near Jammu on Friday (January 31).

The incident took place at around 5.45 am when a police team conducting a vehicle check near the Nagrota toll post on the Jammu-Srinagar highway intercepted a Srinagar-bound truck. An encounter ensued when the terrorists inside the truck fired at the police, injuring one policeman. The police fired in retaliation killing one militant while the others ran towards the forest area.

DGP J&K Police, Dilbagh Singh said the terrorists were part of a new group and they were on their way to Srinagar. “These terrorists were a newly infiltrated group and were on their way to Srinagar. It is suspected that they infiltrated from Kathua, Hiranagar border. An investigation is on,”A search operation is underway to track down the militants.

Meanwhile, all schools in Udhampur zone have been shut down following the ongoing encounter between security forces and terrorists on Jammu-Srinagar highway as confirmed by Piyush Singla, District Development Commissioner of Udhampur.