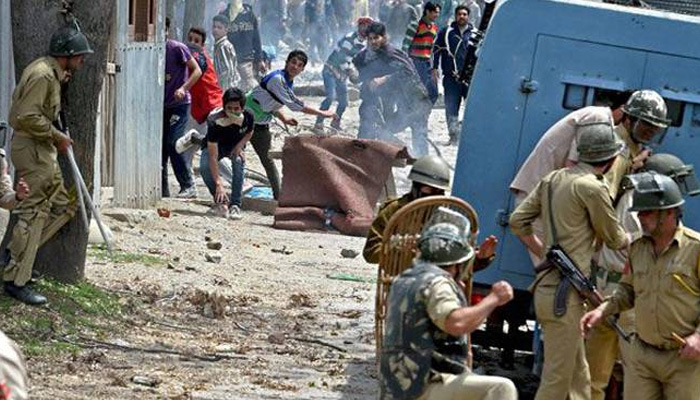 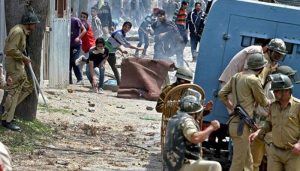 CRPF DG RR Bhatnagar said a number of steps were taken in the recent past like re-positioning of the troops, having a new strategy to achieve the results that are being seen now.
New Delhi: The Central Reserve Police Force (CRPF) on Tuesday said that incidents of stone pelting in the Kashmir Valley have come down to half in 2017, thanks to the “effective” action of security forces and probe against separatists and others.
As per CRPF DG RR Bhatnagar, while a total of 1,590 incidents of stone pelting were registered in 2016, this year the latest figures are 424, which is “half of what was last year”.
Talking to reporters on the eve of the 78th Raising Day of the paramilitary, the CRPF DG  said: “Why or how has this happened? I would say it is a complex phenomenon…It is a mix of everything.”
“It is a mix of what the NIA (National Investigating Agency) is doing, it is a mix of state police and security forces doing the kind of control and hence the efforts of the law breakers, stone pelters and violent mobs is effectively blocked and hence pelting has gone down,” the DG said.
“Our assessment is that situation in the Kashmir Valley has improved,” he said.
The CRPF was coordinating with the National Investigating Agency in its crackdown against separatists and their operatives, Bhatnagar added.
The CRPF DG said with the use of less lethal ammunition, the force which has deployed 60 battalions (about 60,000 personnel) in Jammu and Kashmir, has “effectively been able to control” mobs.
“We have not allowed violent mobs to interfere in the conduct of anti-militancy operations. There is a very close coordination between the Jammu and Kashmir Police, the CRPF and the Army,” the DG said.
He added good intelligence was coming from the state police and other agencies.
The CRPF top boss said a number of steps were taken in the recent past like re-positioning of the troops, having a new strategy and standard operating procedures (SOPs), to achieve the results that are being seen now.
“With the use of less lethal weapons (like pellet guns and pump action guns) we are able to minimise injuries to our troops and also to the mob,” he said.
“The number of our personnel injured has also come down to one-third of what was the picture last year. We have had good successes,” the 1983-batch IPS officer of Uttar Pradesh cadre said.
Talking about terrorist incidents in the Valley, Bhatnagar said these also have “come down”.
Answering a question on a recent incident where a vehicle carrying Amarnath yatris was ambushed by militants– killing eight of them– the DG said some changes in security drills have been effected till the remaining part of the yatra.
“This particular incident occurred because the party (the ill-fated vehicle) was travelling outside the parameters of the main security arrangements that have been made for the yatra,” he said.
Then the question comes, the DG said, could the vehicle have been stopped and taken to a safer location? But there are many things involved here, he said.
“What we have done after that in collaboration with the J&K police is that we have set up more check points and efforts are being made to ensure the security is vigilant and night time ‘bandobast’ has also been increased,” Bhatnagar said.
According to figures provided by the force, it killed 75 militants, apprehended 252 and recovered 118 arms this year in its operations in the Kashmir Valley.
The Central Reserve Police Force was raised on July 27, 1939, as Crown Representative’s Police (CRP) and at present is the largest paramilitary of the world with about three lakh personnel in its strength.