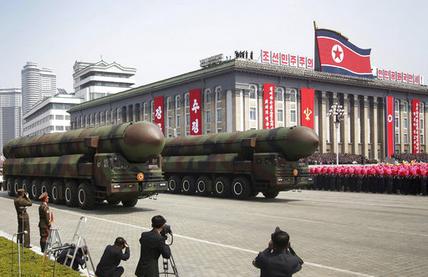 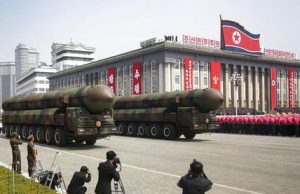 PYONGYANG, North Korea (AP) – A U.S. guided-missile submarine arrived in South Korea on Tuesday and envoys from the U.S., Japan and South Korea met in Tokyo, as North Korea prepared to mark the anniversary of the founding of its military.
Although a major event around the anniversary was viewed as possible, the morning came and went without any nuclear tests or ballistic missile launches. All that was publicly scheduled for the day were gatherings for mass dancing, a common celebration on major North Korean holidays.
At a “national meeting” of thousands of senior military and civilian officials the day before, North Korea’s Minister of Defense Gen. Pak Yong Sik reiterated that the country is ready to use pre-emptive strikes or any other measures it deems necessary to defend itself against the “U.S. imperialists.”
“The situation prevailing on the Korean peninsula is so tense that a nuclear war may break out due to the frantic war drills of the U.S. imperialists and their vassal forces for aggression,” he told the gathering.
North Korean leader Kim Jong Un did not attend. It was not known how he was marking Tuesday’s anniversary.
North Korea often marks significant dates by displaying its military capability and has conducted five nuclear tests. Pyongyang launched a missile one day after the 105th birthday of late founder Kim Il Sung on April 15.
Such a move could test the developing North Korea policies of President Donald Trump, who has reportedly settled on a strategy that emphasizes increased pressure on North Korea with the help of China, the North’s only major ally, instead of military options or trying to overthrow North Korea’s government.
The nuclear-powered USS Michigan submarine arrived at Busan in what was described as a routine port visit to rest the crew and load supplies. Commander Jang Wook from the South Korean navy public affairs office said there is no plan for any drill.
The submarine’s arrival comes as the USS Carl Vinson aircraft carrier heads toward the Korean Peninsula in a show of force.
In Tokyo, U.S. representative for North Korea Policy Joseph Yun was meeting Tuesday with his Japanese counterpart Kenji Kanasugi and Kim Hong-kyun of South Korea. Japan’s Chief Cabinet Secretary Yoshihide Suga told reporters that the three envoys were to deepen cooperation and stay on the same page amid growing tension.
Japan’s Foreign Ministry also announced that China’s envoy for North Korea, Wu Dawei, will visit Tokyo on Tuesday for talks with Kanasugi, which may take place later this week.
Trump spoke by phone with both the Japanese and Chinese leaders Monday. Chinese state broadcaster CCTV quoted President Xi Jinping as telling Trump that China strongly opposes North Korea’s nuclear weapons program and hopes “all parties will exercise restraint and avoid aggravating the situation.”
Japanese Prime Minister Shinzo Abe and Trump agreed to urge North Korea to refrain from what Abe called provocative actions. “The North Korean nuclear and missile problem is an extremely serious security threat to not only the international community but also our country,” the Japanese leader told reporters in Tokyo afterward.
Recent U.S. commercial satellite images indicate increased activity around North Korea’s nuclear test site, and third-generation dictator Kim Jong Un has said the country’s preparation for an ICBM launch is in its “final stage.”
South Korea’s Defense Ministry has said North Korea appears ready to conduct such “strategic provocations” at any time. South Korean Prime Minister Hwang Kyo-ahn, the country’s acting leader, has instructed his military to strengthen its “immediate response posture” in case North Korea does something significant on Tuesday’s anniversary.
There is also a possibility that North Korea, facing potential changes in regional dynamics as Washington presses Beijing to pressure North Korea more aggressively, opts to mark the anniversary with a missile launch of lesser magnitude. North Korea separately fired what U.S. officials said were a Scud-type missile and a midrange missile earlier this month, but the launches were analyzed as failures.
Adding to the tensions, North Korea detained a U.S. citizen on Saturday, bringing the number of Americans being held there to three. The reasons for the detention of Tony Kim, who taught accounting at the Pyongyang University of Science and Technology, weren’t immediately clear.
Under Kim’s leadership, North Korea has been aggressively pursuing a decades-long goal of putting a nuclear warhead on an ICBM capable of reaching the U.S. mainland.
Last year, North Korea conducted two nuclear tests, which would have improved its knowledge in making nuclear weapons small enough to fit on long-range missiles. It also launched a long-range rocket last year that delivered a satellite into orbit, which Washington, Seoul and others saw as a banned test of missile technology.