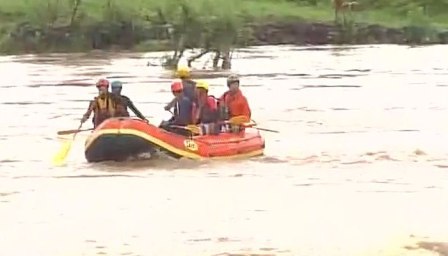 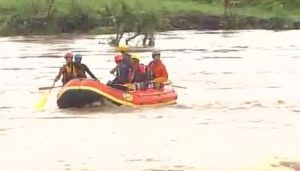 Mumbai: A British era bridge on the Mumbai-Goa National Highway collapsed in the wee hours of Wednesday due to excessive rains in the Konkan region in Maharashtra.
The rescuers have recovered two dead bodies from the overflowing Savitri river and a massive search is on for others who are missing, Raigad Collector Sheetal Ugale has confirmed.
At least 44 people, two buses and several other vehicles went missing near Mahad city after the bridge, more than seven decades old and a critical link to the Mumbai-Goa National Highway, crashed around 1 am due to the flood waters rushing into the river.
Two state transport buses with 11 passengers each are also missing and there was no contact with either their drivers or the passengers, Raigad Collector Sheetal Ugale said.
Since the Maharashtra State Road Transport Corporation buses, which started from Mumbai, did not arrive at their scheduled Mahad depot, Ugale appealed people to get in touch with the concerned authorities about their missing relatives. Locals said that around five to six private vehicles were also missing and they were feared to be washed away in the floods.
The ICG has meanwhile pressed Chetak Helicopters into search operations for tracing missing vehicles. Sea king 42C all weather aircraft with diving team has also been pressed into service by the Indian Navy. A massive search operation have been initiated, Ugale confirmed
“The bridge was built during the British era. After discussion with the National Highways Authority, we have shifted traffic to the new parallel bridge nearby. We are trying to confirm reports of other missing vehicles,” Ugale said.
Union Home Minister Rajnath Singh today informed Lok Sabha that 4 NDRF teams comprising 115 personnel including divers along with 12 boats were immediately rushed to Maharashtra bridge collapse site. Centre stands with Maharashtra government in this hour of crisis and assures all possible help, Singh added.
Meanwhile, the Opposition in Maharashtra Legislative Assembly today sought a judicial probe into the Mahad bridge collapse tragedy. Raising the issue in the Assembly, former CM Prithviraj Chavan said a judicial probe should be conducted and action taken against those guilty of allowing the old bridge to remain open for traffic.
A case of IPC 302 should also be filed against PWD minister Chandrakant Patil, he added.
Meanwhile, a 45-member National Disaster Response Force team has reached Raigad from Pune to assist in the rescue operations.
Maharashtra Chief Minister Devendra Fadnavis said that PM Narendra Modi had called him in the morning and assured all help from Centre. NDRF teams have reached and carrying out search operations, the Maharashtra CM added.
As of now we have reports of two state transport buses missing with 22 people onboard, Fadnavis said. He also added that primary reason seems to be high pressure caused due to flooding of river Savitri as heavy rains continue to lash the catchment of Mahabaleshwar.
Raigad Collector has also confirmed that one way traffic has now resumed on the new bridge, he added.
Incessant rains continue to lash the coastal Konkan, northern and western Maharashtra since past five days.