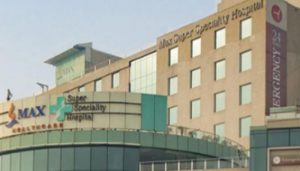 The patient was admitted to Max hospital in Shalimar Bagh area of national capital.
Days after death of twin infants due to alleged medical negligence, Delhi-based Max hospital is in trouble again. The hospital is facing allegations of negligence again over the death of a 58-year-old man.
The patient was admitted to Max hospital in Shalimar Bagh area of national capital with a cardiac problem on December 25, and died during his stay at the hospital.
The deceased has been identified as Kamlesh Chandra, a resident of Delhi.
His daughter, Sarika, has decided to meet Union Health Minister JP Nadda over the incident and raise the issue of alleged medical negligence.
According to her, when the Chandra was brought to the hospital, he was sweating profusely but was conscious. He was taken to the emergency ward of the hospital where an ECG was conducted. The findings of the test showed blockage in veins, following which he underwent angiography.
The doctors advised a bypass surgery. While the family was discussing about the same, the hospital informed them that a stent was already planted without consulting the kin of the patient.
Sarika alleged that her father was kept under supervision of a doctor who was on leave. She said that the hospital asked her to pay a bill of Rs three lakh.
A police complaint has already been filed by the family of the deceased. However, the hospital has claimed that there was no medical negligence on their part. According to Max, the patient was brought in critical condition and immediate treatment was provided to him. They claimed that the course of treatment was made clear to the family and a signature on a form was also taken from them.