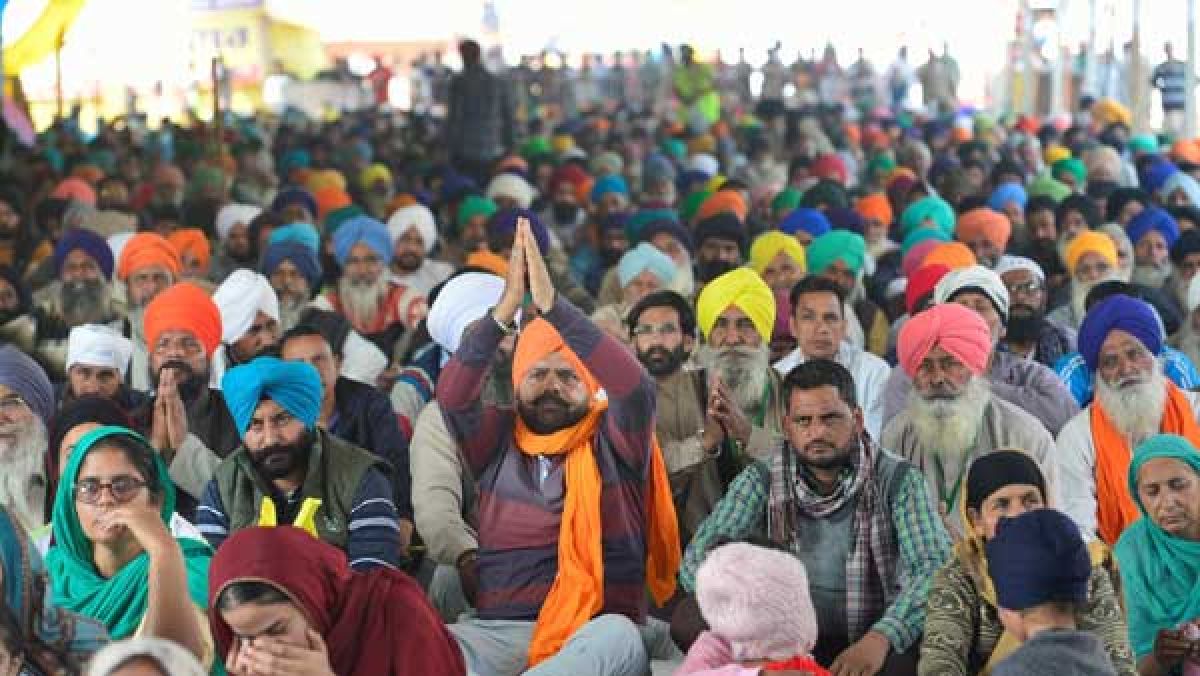 New Delhi, Feb 03: The Samyukta Kisan Morcha (SKM) on Wednesday welcomed the international support pouring in for the agitating farmers saying that while it is a matter of pride that eminent global personalities are showing sensitivity towards the cause of farmers in India.

“The farmer movement is getting stronger day by day. After heavy support in Kisan Mahapanchayats in Uttar Pradesh, farmers have organized Mahapanchayats in Dabra and Phulbagh in Madhya Pradesh, Mehndipur in Rajasthan and Jind in Haryana. A large number of farmers will be coming to Delhi in the coming days,” the SKM said.

“After the atrocities of the government, farmers have again started a dharna at Palwal border. In the coming days, a large number of farmers will reach this site from Madhya Pradesh, Uttar Pradesh and Rajasthan,” she added.

On Tuesday night, Rihanna shared a CNN news article with her 100 million followers on Twitter, calling out the internet shutdown at the protest site.

“Why aren”t we talking about this? #FarmersProtest,” the 32-year-old singer wrote.

Soon after, Swedish teen climate activist Greta Thunberg also came out in support of the protesters as she shared the same article and wrote, “We stand in solidarity with the #FarmersProtest in India.”

Thousands of farmers, mainly from Punjab and Haryana, have been camping at several Delhi border points since November last year, demanding the government to repeal the three farm laws and legal guarantee of minimum support price (MSP) for their crops.

Hollywood star John Cusack, who previously voiced support to anti-CAA protestors in February 2020, retweeted a post by Vanessa Nakate, a Ugandan climate activist, reading, “Let us talk about what is happening in India right now #FarmersProtest.”

The Hollywood star had previously posted in support of the agitation on January 30 with the tweet, “Sikhs farmers are amazing.”

Kamaljit Singh Jhooti, popularly known by his international stage name Jay Sean, took to Instagram and wrote that despite the farmers agitation being one of the largest protests “ever in history”, there has not been enough mainstream coverage of the event.

“I live in the US and I”ve barely seen it on the news or mainstream media. I don”t know what needs to be done to raise more awareness and have more eyes on this but I”ve seen videos that are far too graphic and heartbreaking to post.

“People that are old enough to be my grandparents being trampled over with no remorse or regard. Please go to my story where I will post a petition link and something actionable,” the Indian-origin British artiste wrote.

Baljit Singh Padam aka rapper Dr Zeus retweeted Rihanna”s tweet and wrote that “everyone with sense” across the world are wondering about the lack of spotlight on the protests.

Khalifa took to Twitter and criticised the treatment being meted out to the protesting farmers. “What in the human rights violations is going on?! They cut the internet around New Delhi?! #FarmersProtest,” she wrote.

In a subsequent tweet, the 27-year-old Lebanese American took on those who called farmers “paid actors” as she reiterated her support to them.

“”Paid actors” huh? Quite the casting director, I hope they’re not overlooked during awards season. I stand with the farmers. #FarmersProtest.”

The singer, who has global chartbusters like “Diamonds”, “Umbrella” and “We Found Love” to her credit, was hailed by a section of social media users for speaking up at a time when many Bollywood celebrities have stayed mum on the issue.

“Thank you so much @rihanna. This is a humanity issue! #IStandWithFarmers and this narrative is tired,” Singh wrote.

US-based Indian filmamker Ritesh Batra, known for films like “The Lunchbox” and “Photograph”, tweeted that the “whole world is watching the farmer agitation in India.”

Popular Punjabi actor-singer Diljit Dosanjh, one of the first celebrities to voice his support for farmers, came up with a song dedicated to Rihanna, title Ri Ri.

“The world is watching. You don”t have to be Indian or Punjabi or South Asian to understand the issue. All you have to do is care about humanity. Always demand freedom of speech, freedom of press, basic human and civil rights-equity and dignity for workers,” she wrote.

On Tuesday, Bollywood actors Richa Chadha, Swara Bhasker, who have been vocal supporters of the agitation, lauded Rihanna”s remarks, while actor Kangana Ranaut criticised her statement.

Actor Sayani Gupta lamented the silence of mainstream Bollywood celebrities and sportspersons on the contentious issue.

Farmer unions have announced a countrywide blockade of national and state highways for three hours on Saturday when they would block in protest against the internet ban in areas near their agitation sites, harassment allegedly meted out to them by authorities and other issues.

Sites of the farmer protest at Delhi”s borders have turned into fortresses with police beefing up security and putting up multi-layer barricades to stop the movement of vehicles. Concertina wires have also been put up to keep off people on foot.

The strengthened security measures come after the violence during the Republic Day tractor parade by the farmers.