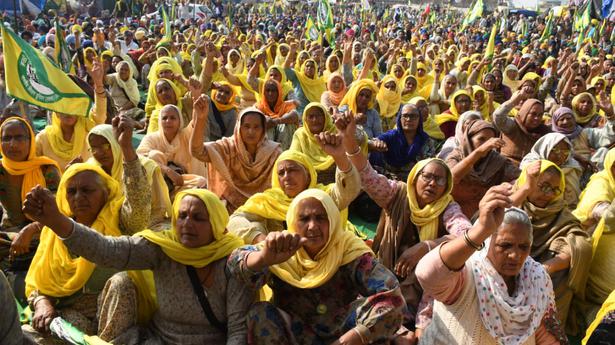 Conspiracy hatched because Centre was shaken by the agitation, says Samukyt Kisan Morcha.

Farmers’ unions have blamed Tuesday’s violence on a conspiracy hatched with the Kisan Mazdoor Sangharsh Committee and with “anti-social elements such as Deep Sidhu”, as the Centre had been shaken by the agitation.

They claimed that the incidents on Republic Day had “exposed the anti-farmer forces” and vowed to continue a peaceful protest.

After an emergency meeting under the chairmanship of veteran Punjab leader Balbir Singh Rajewal, the Samukyt Kisan Morcha said they had “discussed the violent incidents in New Delhi and concluded that Union Govt. has been severely shaken by this peasant agitation. Therefore, a dirty conspiracy was hatched with Kisan Mazdoor Sangharsh Committee and others against the peaceful struggle of other farmer organisations.”

After the Republic Day parade plans were made, “anti-social elements like Deep Sidhu and others”, including the KMSC, attempted to torpedo the farmers’ agitation, according to the SKM.

“Under this conspiracy, the said Kisan organisation and other persons announced that they would march on Ring Road and unfurl a flag on the Red Fort. As a corollary of conspiracy, the Kisan Mazdoor Sangharsh Committee started marching on the Ring Road, two hours before the scheduled march of the struggling organisations. It was a deep rooted conspiracy to knock down the peaceful and strong farmers’ struggle,” said the SKM statement.

The farm unions condemned the violence, the government, the KSMC and the anti-socialelements who tried to damage the struggle. “The organisations resolved not to allow the government and other forces inimical to the peaceful movement to break this struggle. Yesterday’s events exposed and isolated the anti-farmer forces clearly,” said the SKM statement.

The SKM claimed that the KMSC is “not part of the organisations which jointly undertook the struggle”, noting that the Punjab union had set up its own separate protest site with a separate stage at the Singhu border within 15 days of the start of the agitation. Although the KMSC is part of the negotiations with the Centre along with the other unions, SKM leaders emphasised that this was only because the government had invited the rogue Punjab union.

Union leaders appealed to farmers to stay on at the protest venues and continue the agitation. A meeting of the leadership is ongoing at the Singhu border to chalk out the future programme. The SKM had earlier announced it would conduct a march to Parliament on February 1, when the Union Budget is presented, but it is not clear if that will now be held.