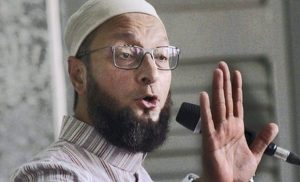 Hyderabad: AIMIM chief Asaduddin Owaisi on Tuesday said that the Babri Masjid case is about the title and he is waiting to seeing if “conspiracy charges” would be pressed against senior BJP leaders in the matter.
His comments came on a day when the Supreme Court suggested that fresh attempts be made by all parties concerned to find a solution to the Ayodhya temple dispute which is a “sensitive” and “sentimental matter”.
In a tweet, Owaisi said, “Waiting to hear about whether conspiracy charges will be held against (L K) Advani, (Murli Manohar) Joshi, Uma Bharati (Bharti) in Babri demolition case since….1992”.
The Lok Sabha member from Hyderabad also hoped that the Supreme Court would decide on the “contempt petition which is pending since demolition of Babri Masjid in 1992.”
The Allahabad High Court had ruled a three-way division of the disputed land – one third for the Sunni Waqf Board, one third for the Nirmohi Akhara and one third to the party for ‘Ram Lalla’.
He also said that, “Dalit Christian & Muslim issue is also resolved (which is) pending in Apex court for many years not giving Dalit status violation of Fundamental rights.”
While BJP, RSS and VHP welcomed the apex court’s ruling, the Babri Masjid Action Committee rejected it, saying, ‘an amicable solution to the Ayodhya dispute cannot be achieved’.
The reactions came after the Chief Justice of India (CJI) JS Khehar asked both the parties in the Ram Janmbhoomi-Babri Masjid dispute to resolve their differences amicably outside court and even offered to mediate.
“Give a bit, take a bit. Make an effort to sort it out. These are issues best decided jointly,” Justice Khehar said.
“It is an issue of sentiment. First sit together and sort it out. Moderators from both sides can hold a meeting,” Justice Khehar said. This was not a judicial order, but just an offer by the CJI.