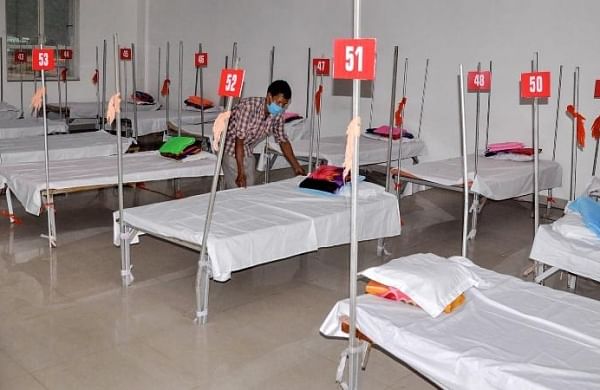 GUWAHATI: The Assam government on Wednesday ordered to shut all offices, religious places and weekly markets for 15 days in urban and semi-urban areas of the state, besides banning the movement of people from 2 pm to 5 am in the wake of the rising COVID-19 cases.

Issuing a new set of guidelines for the urban and semi-urban places in the periphery of 5 km of municipal areas, Chief Secretary Jishnu Barua said all standalone shops and commercial establishments shall shut down at 1 pm on all days.

“Complete lockdown is an option, but we are going gradually in a phased manner. We hope these measures will work in the next two-three days,” he said at a press conference here.

The new restrictions will come into effect from Thursday.

As per the restrictions notified by the Assam State Disaster Management Authority (ASDMA), weekly haats, bazaars, educational institutions and all government and private offices have been ordered to shut for the next 15 days.

“Government officers of deputy secretary and above rank and senior executive in private sector along with their key support staff will be allowed to attend office upto 1 pm only for emergency and essential works,” the order stated.

However, these restrictions will not be applicable for organisations rendering essential and emergency services, law enforcement services and election works.

“All religious places shall remain closed for 15 days. Funeral/last rites related gatherings shall not be more than 10 persons,” the order said.

Likewise, weddings and religious functions will be only private affairs and be allowed with the presence of a maximum of 10 persons and no reception parties will be allowed post or pre wedding.

“In case the test positivity of COVID-19 in any area reaches five per cent or more in the last one week, District Magistrate will notify such areas as containment zone and ensure necessary containment measures for COVID-19,” the ASDMA said.

All public transport will be allowed with 30 per cent of seating capacity, while auto-rickshaws, cycle-rickshaws, taxis shall operate with one driver and two passengers only.

“Pillion riding will be totally prohibited in two- wheelers except with women and children.”

“All vehicles other than government vehicles will be allowed to ply in accordance with an odd-even formula to be decided by the jurisdictional district disaster management authority between 5 am to 2 pm,” the order stated.

ASDMA further said that there shall be a total ban on the movement of individuals from 2 pm to 5 am daily.

For the rest of the state, all restrictions announced earlier such as night curfew from 6 pm to 5 am with total ban on movement of persons at public places on all days will continue, except for those engaged in essential and emergency services.

When asked why the government is not considering imposing a complete lockdown, Barua said that any such drastic measures adversely affect the poor people and that will be considered as the last resort.

Director-General of Police Bhaskar Jyoti Mahanta said the police will implement the restrictions very strictly if the people do not follow them.

“If we see people crowding at any place, say in front of a permitted shop, police will be ruthless. We will use force and lathi-charge them. You may go and file cases against us, but we don’t care.”

“If someone organises any function secretly at home and invites people, then it will be considered as cheating and betrayal. We will not only file a case under Disaster Management Act, but also lodge an attempt to murder case,” Mahanta said.

The state on Tuesday registered 127 COVID-19 fatalities, its highest in a single day so far, taking the death toll to 1,838, a bulletin issued by the National Health Mission said.

The number of active cases currently is 37,500, the bulletin said.

It said that 4,409 patients recovered from the disease during the day, increasing the total number of cured people to 2,61,980.

Of the fresh fatalities, 36 were reported from Kamrup (Metro) district, seven from Dibrugarh and six from Nagaon.

The other deaths were registered in several other districts.

The death rate is currently 0.60 per cent and the number of COVID-19 positive patients dying due to other reasons is 1,347, the bulletin said.

The new cases were detected out of 68,572 tests conducted on Tuesday, while the number of cumulative tests done in the state so far is 92,17,510.

Altogether 31,93,082 people have till date been vaccinated against coronavirus in the state and of them, 7,08,480 have received both doses.