Breaking News
Home / World / As old as the war: 5-year-old Syrians grow up away from home

As old as the war: 5-year-old Syrians grow up away from home 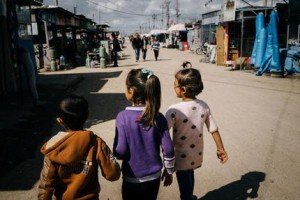 BEIRUT (AP) – They are as old as the Syrian war: Five-year-old Syrian children growing up as refugees in foreign, unfamiliar places far away from home.
They are the silent victims of a horrific war, innocent of the violence that surrounds them yet already familiar with grown-up words like war, airstrike, militias and refugees.
Some were born in Syria but along with their families fled war and siege soon after. Others were born in neighboring countries. Some are getting ready for the treacherous journey to Europe and others have already made it.
None will have any recollection of what Syria was like before the war.
On the 5th anniversary of the Syrian war, The Associated Press met with five-year-old Syrian children and their parents in Lebanon, Jordan, Turkey, Iraq and Greece. The AP also asked their parents what they would share with their children about the Syria they knew. Some were hesitant, as if reminiscing was a luxury. Some spoke freely. Sadness is the dominant theme.
WINDA FARMAN HAJI, NORTHERN IRAQ
Winda was born in a village outside Malikiyah in the Kurdish part of northeastern Syria, where her father Sharif Farman Haji, 44, worked as a lorry driver on the Malikiyah-Qamishli route. Her family took refuge in the Kawergosk refugee camp outside of Irbil, in northern Iraq, in August 2012 but their troubles didn’t end there. Her uncle died fighting IS in Kobani in the ranks of the Iraqi Peshmerga.
Winda is now in kindergarten and her older brother Juwan, 8, is in school. She has a little sister, Gulistan, who is 2. Winda shows great talent in drawing and her parents say she is very impatient to go to kindergarten every morning.
YASMINE ABDULKARIM, LEBANON
Yasmine was born in the province of Aleppo on Oct. 15, 2011 but doesn’t have any recollection of Syria. Her parents, 32-year-old AbdulKarim Salem Al-Ali and 25-year-old Rukaya Mohammed Al-Aswad were farmers. When nearby towns were hit by shells, they left their village of Oum Al-Karameel.
The family now lives in a refugee settlement in Qab Elias, in the Bekaa valley. “If we were in Syria, I would love to take her home, to the house she was born in but doesn’t know,” her mother Rukaya says. “I would take her to all the places we loved and she would love them too.”
All of the refugees living in the camp are from their village in Aleppo or other villages nearby. Since they were among the first to arrive, AbdulKarim acts as the village’s “shawish” or leader, and handles interaction with the local municipality. Yasmine did not get a spot at the local public school. Instead she attends an informal literacy class in the camp. She has three siblings, Bayan, 3, Mohamed, 1, and Mahmoud, who is four months old.
HAMZA ALI, TURKEY
Mustafa Ali, 39, often tells his children about the beauty of the land they left behind. He was a primary school teacher and a sports trainer in Aleppo until he had to flee three years ago with his wife Suzan, 25, and his two children Sedra, 8, and Hamza, 5. His youngest daughter, Hulya, 2, was born in their adopted city, Istanbul, Turkey.
But life in Istanbul is hard. Mustafa doesn’t have a work permit. Every now and then he finds freelance work as a Turkish-Arabic translator and as a real estate agent, mostly for Syrians living in Istanbul. He hopes to take his family to the Netherlands one day, where he says there are fewer refugees than Germany.
MARIA AL TAWIL, GREECE
Maria was born just four months before the war broke out. She has experienced nothing but war, her mother Narjes Al Shalaby, 27, told the AP. “I have a lot of anxiety, she hasn’t lived a good day in her life,” she said.
Al Shalaby and her two daughters, Maria and Baraa, 10, are heading to Germany to reunite with the rest of their family. Every day after they wake up, the sisters stand in line to collect food, such as a sandwich. They don’t have much else to do all day, their mother says.
“During the festivals, I’ll take them to the restaurants. If it’s summer time I’ll take them to the swimming pool, and teach them how to swim,” said Al Shalaby regarding what she would like to share with her daughters if the situation in Syria was different. “Maria has aged sooner than she should,” she added. “I just wish for her to be educated, so she can do good in the world,” she said.
TALA AL-FAOURI, JORDAN
Just two weeks after the Syrian conflict started, Tala was born in the southern province of Daraa, where the Syrian conflict originated, on March 28, 2011. Her parents, former oil field worker Izhak al-Faouri, 34, and schoolteacher Doaa al-Faouri, 26, fled to Jordan after airstrikes drove them out of their homes in the village of Sheikh Miskeen.
Her mother Doaa dreams of returning and raising Tala in Syria. “We were not rich, but we were not poor. We lived a fine life. God willing, she will live like we once did. We don’t want more, or less, than that,” she says.
For the past three years, the al-Faouris have lived in the Zaatari refugee camp in northern Jordan with their three children: Tala, 5, Taim, 3, and four-month-old Lana. Izhak and Doaa teach their children about their homeland, which none of the children remember, through old photos, stories and daily voice and video calls to relatives inside the war-ravaged south of Syria.