Breaking News
Home / World / After bus yatra in UP, Congress to roll out 13 publicity ‘raths’ in Punjab

After bus yatra in UP, Congress to roll out 13 publicity ‘raths’ in Punjab 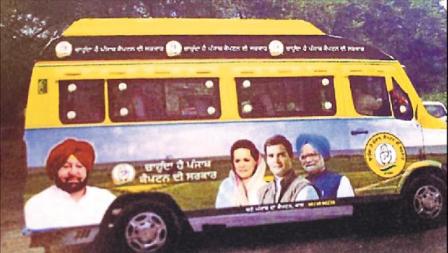 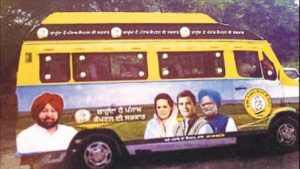 As the ruling Akalis sit glued to unfolding Aam Aadmi Party (AAP) soap opera, the Congress wants to speed past both its rivals, literally.
The party which has flagged off its campaign in poll-bound Uttar Pradesh through a bus yatra by its senior state leaders to highlight “27 saal, UP behaal”, will take its poll campaign “Har saath Congress” to Punjab voters via publicity “raths” — one each for the 13 Lok Sabha constituencies.
These vans would be flagged off on September 18 from the Congress Bhawan in Chandigarh by Punjab Congress chief Captain Amarinder Singh.
Painted in hues of Congress flag, the “raths” will carry the pictures of party president Sonia Gandhi, vice-president Rahul Gandhi, former Prime Minister Manmohan Singh along with Amarinder.
While the vans of ruling Akali Dal are attracting crowds by playing religious movies such as ‘Char Sahibzaade’, those of Congress will give away key chains and mobile stickers of “Chaunda hai Punjab, Captain di sarkar” and “Punjab da Captain” to voters.
As they travel through Punjab, party leaders would also hold nukkad meetings in each constituency — four a day, 12 meetings per halqa (assembly constituency).
The mass-contact programme aims to reach out to at least 20 lakh people across the state. The programme will continue for 40 days and each of the 117 assembly segments will be covered at least thrice, as per the final programme chalked by Amarinder along with general secretary in-charge for Punjab Asha Kumari, secretary in-charge Harish Chaudhary, CLP leader Charanjit Singh Channi and senior vice-president Lal Singh here on Monday.
Senior leaders such as Channi, Sunil Jakhar, Manpreet Badal, Ravneet Bittu, Chaudhary Santokh, Pawan Kumar Bansal and Ravneet Bittu and party MLAs will address these meetings.
Asha Kumari said the party was focusing on positive campaign and the programme will mobilise workers right up to the booth level. “Different committees headed by senior leaders are also holding their own programmes against drugs, farmer issues, women issues and getting inputs for party manifesto. We are not concentrating on what other parties are doing but on our own campaign,” she said.