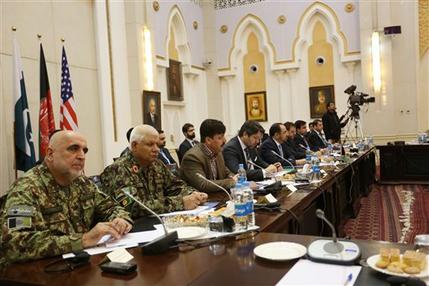 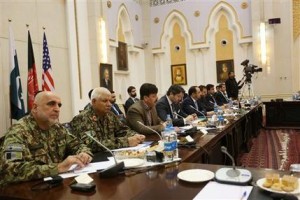 KABUL, Afghanistan (AP) – Talks in Kabul Tuesday between representatives of four countries trying to end Afghanistan’s war with the Taliban are likely to set a date for a face-to-face meeting between the two sides, an Afghan official said.
Representatives of Afghanistan, Pakistan, China and the United States are meeting in the Afghan capital for a fourth round of discussions setting conditions for eventual peace talks between Kabul and the Taliban.
Javid Faisal, the deputy spokesman for Afghan Chief Executive Abdullah Abdullah, told The Associated Press the delegates “should give a date for the first direct peace talks.”
Delegates agreed at their last meeting in Islamabad on Feb. 6 to work toward bringing the two sides together to restart a peace process – derailed last summer by the revelation that the Taliban’s one-eyed leader Mullah Mohammad Omar had been dead for more than two years – before the end of February.
In remarks opening the meeting Tuesday, Afghan Foreign Minister Salahuddin Rabbani reiterated that details of the first proposed meeting would be announced before the end of this month.
The four countries have called on the Taliban to enter peace talks with Kabul and work toward cutting violence that has killed thousands of Afghan civilians since the insurgency started almost 15 years ago.
Taliban leaders, who fled across the Pakistan border to escape the 2001 U.S. invasion, are believed to be harbored by Pakistani authorities, in particular the ISI intelligence agency, in cities including Quetta, Karachi and Peshawar. While Pakistan denies providing safe havens for the insurgents, Afghan President Ashraf Ghani has led accusations that the Taliban are a proxy force for Islamabad’s regional interests.
This deep mistrust of Pakistan means that “it is three against one around the talks table,” said an Afghan official who asked not to be named as the sensitivity of the issue meant he had no authority to speak publicly.
While China is a reluctant international peace broker, as its own foreign policy is built on a principle of “non-interference” in other countries’ affairs, its presence does appear to be yielding results. Analysts agreed that China does appear to be exerting a useful influence on its ally, Islamabad.
“Their close, longstanding security relationship gives China unique leverage but there are also positive incentives,” said Andrew Small, an expert on China’s relationships with Pakistan and Afghanistan, and author of “The China-Pakistan Axis.”
China’s multi-billion dollar development plans for Pakistan, through the China-Pakistan Economic Corridor, require a “stable neighborhood,” Small said. “China’s presence at the talks is also a reassurance that Pakistan’s interests will be looked after in any settlement – they’re a trusted partner and it reduces the Pakistani anxiety about deals being done behind their back.”
China also has ties with the Taliban dating to their 1996-2001 rule when Beijing sent representatives to Kabul and Kandahar to secure guarantees that anti-Beijing groups such as the East Turkistan Islamic Movement would not use Afghanistan as a base from which to attack China. Beijing fears the Muslim Uighurs of the far-west Xinjiang province, which shares a short border with Afghanistan, present a nascent threat to its national security, through groups like the ETIM.
Raffaello Pantucci, director of international security studies at London’s Royal United Services Institute, said all parties to the peace process realize that China “is the one regional power which has lots of money, meaning they all want Chinese support and investment,” he said.
Afghanistan has long courted Chinese investment in developing its infrastructure and minerals sector. China has ambitions for Afghanistan’s raw materials as well as using the country as a route to the markets of the west.
Three officials close to the talks process have said that Pakistan’s representatives had earlier given assurances that violence will be noticeably reduced in coming weeks. As the Taliban are fighting Afghan forces on multiple fronts, their willingness to comply with Afghan demands for a reduction in violence should become clear as the warmer weather approaches.
The Taliban have announced the date of their so-called spring offensive most years since launching their insurgency, a ritual the officials said could be suspended this year, helping build trust between Afghanistan and Pakistan.