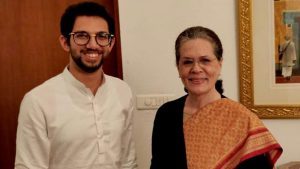 Aaditya Thackeray met both Sonia Gandhi and Manmohan in Delhi and invited to them attend the swearing-in ceremony of his father Uddhav Thackeray as  Maharashtra chief minister.

Aaditya, who won the October Maharashtra Assembly election from Worli, met Sonia Gandhi at her 10, Janpath residence. The Congress later tweeted a photo of the meeting of the two leaders.

It is to be noted that the Congress is part of the three-party coalition ‘Maha Vikas Aghadi’ (MVA), which also includes Shiv Sena and Nationalist Congress Party. Talking to media after the meeting, Aaditya, 29, said that he went to meet Sonia Gandhi to invite her for the oath-taking ceremony to be held at Mumbai’s iconic Shivaji Park.

Aaditya met former PM Manmohan at the latter’s residence and invited him to attend the swearing-in ceremony of Uddhav Thackeray, the Shiv Sena supremo who is going to lead the MVA government in Maharashtra. Aaditya, who is also the Yuva Sena chief, was accompanied by Shiv Sena secretary Milind Narvekar.

On Tuesday (November 26), Thackeray was unanimously elected as the leader of the three-party alliance. MLAs of NCP, Congress and Shiv Sena had met Maharashtra Governor Bhagat Singh Koshyari and submitted a letter declaring Udhhav Thackeray as their leader, following which, he was asked to take oath as new chief minister of the state on November 28.

The political development came after BJP leader Devendra Fadnavis submitted his resignation as Chief Minister to the Governor on Tuesday as “the BJP fell short of the required number of MLAs to win the scheduled floor test”. Supreme Court had asked the Fadnavis government to prove its majority in the 288-member Assembly before 5 pm on Wednesday. 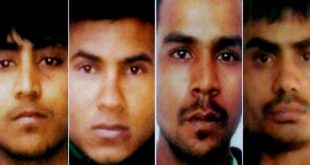 The convicts, however, have been lodged in different cells even in the same jail, and …