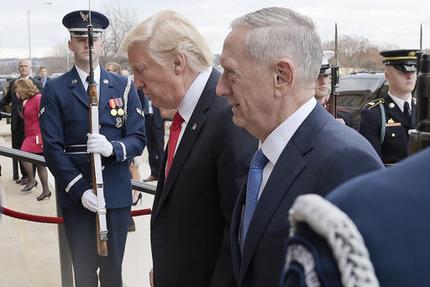 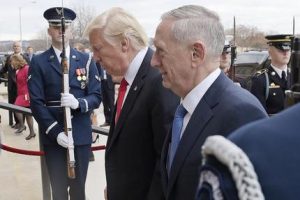 TOKYO (AP) – North Korea will be casting a dark – and nuclear – shadow over U.S. Defense Secretary Jim Mattis’ first foray abroad.
When Mattis calls on South Korea and Japan from Wednesday he will be visiting Washington’s two staunchest allies in Asia. Both host tens of thousands of American troops and both will be looking for reassurances the new administration in the U.S. is not going to drop the ball on North Korea.
North Korea, racing ever closer to having a nuclear-tipped missile that could strike the U.S. mainland, is without doubt already one of the biggest security challenges on new President Donald Trump’s plate. Lately, Pyongyang has been taking a wait-and-see stance toward Washington, hoping Trump might be willing to roll back America’s “hostile policies.”
Don’t expect that to last long.
If he hasn’t already got one, Trump may not have long to come up with a plan. Here are four reasons why:
ICBM LAUNCH
One could come at any time.
Kim Jong Un warned in his annual New Year’s address that North Korea is in final stages of readiness to test-launch an intercontinental ballistic missile, a crucial step it needs to take to demonstrate it has the technology to attack the U.S. mainland. North Korean officials have followed up with statements that Pyongyang has the right to conduct such a launch any time it sees fit. Satellite imagery appears to suggest something is, indeed afoot, though the North could be bluffing, planning to launch a different kind of missile or may not even have a workable ICBM to test. Even so, the missile threat is real, and growing. Pyongyang has a wide range of short- and intermediate-range missiles capable of hitting South Korea, not to mention U.S. military bases in Japan. It conducted a record number of tests last year, including its first from a submarine, which is an important breakthrough.
NUCLEAR TEST
More are almost certainly in the offing.
North Korea by all accounts has been rushing ahead with its development of nuclear weapons, despite international sanctions and condemnation. It conducted two nuclear tests last year, starting off 2016 with what it said was its first test of an H-bomb. The second test, in September, was the strongest blast to date. Kim Jong Un has repeatedly stated that nuclear weapons are the cornerstone of his national defense strategy and has shown no intention of giving them up. Experts differ on whether the North has a nuke small enough to mount on a long-range missile, but agree more tests are likely. How Trump handles that will have major repercussions throughout the region. There’s already talk on the fringes in South Korea and Japan about the strategic value of getting nuclear weapons of their own.
REACTOR RESTART
Already done, according to satellite photos.
Kim Jong Un probably has between 10 to 20 or more nuclear weapons. But to build up his stockpile, he needs fissionable material – and reports suggest he may have restarted the long-shuttered Yongbyon nuclear facility to solve that very problem. Working from satellite photos taken earlier this month, analysts Jack Liu and Joseph Bermudez posted their conclusion, that the reactor is now up and running, on the respected website 38 North. That’s important because some experts believe the facility could produce about 6 kilograms (13 pounds) of plutonium a year, enough to make one or two nuclear weapons.
WARGAMES
Beware the ides of March.
Spring is traditionally the time when tensions on the Korean Peninsula hit their peak. It’s when the North Korean military is just coming off its winter training cycle and, south of the Demilitarized Zone, the U.S. and South Korea conduct massive joint exercises to hone their fighting skills. The wargames have always been a major “provocation” in the eyes of Pyongyang, though Seoul and Washington say they are defensive in nature. The atmosphere has grown more toxic in recent years, however, amid South Korean reports that the exercises now include training for “decapitation strike” scenarios to take out Kim Jong Un and his top leadership. Pyongyang has said that crosses a red line.