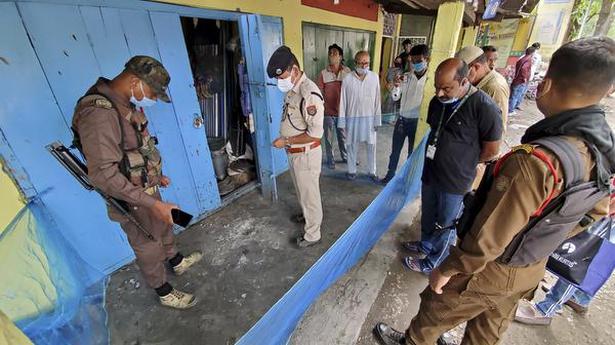 On May 11, a 12-year-old boy was killed in a similar explosion in the same Tinsukia district

This was the second such incident in the district in four days. A 12-year-old boy was killed in Jagun on May 11 in a grenade explosion.

On Friday, two motorcycle-borne men lobbed the grenade in front of a hardware shop at Tingrai Bazar in oil town Digboi, locals said. A customer died in the blast, while three were seriously injured.

They were taken to the Assam Medical College Hospital in Dibrugarh. One of them died of his injuries later.

“We have some clues. We are hopeful of nabbing the miscreants soon,” Tinsukia Superintendent of Police Nimbalkar Vaibhav Chandrakant said.

“This act of violence is a sign of desperation and cowardice. The State government will never tolerate such kind of high-handedness leading to the loss of precious human lives,” he said.

The United Liberation Front of Asom-Independent has denied any involvement in the Digboi blast. “We had no hand in the death of a boy at Jagun either,” the outlawed outfit said in a statement. It accused the State machinery of orchestrating such explosions to put them in poor light “in the midst of the COVID-19 pandemic”.

Previous kerala lockdown extended till may 23 what is open what is not covid cases alert latest news updates
Next Kerala: Triple lockdown to be imposed in Thiruvananthapuram, Ernakulam, Thrissur and Malappuram